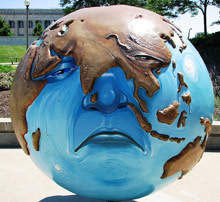 Seeing as global warming is a defining issue of our time and all, it's not a shock that museums would want to feature exhibits on the subject. But given that climate change is still (somewhat, on a dwindling basis) a politically-charged and controversial topic, what stance should a museum show take on the principal point of contention—specifically, whether or not the cause is mostly (or only) human activity? That's the dilemma that New York's famed American Museum of Natural History is flirting with in its new show, "Climate Change: The Threat to Life and A New Energy Future." The exhibition takes the definitive stance that human activities are primarily responsible for climate change. Museum curator Edmond Mathez, who first proposed the show several years ago, said the man-made direction was a deliberate move to educate the public on the real scientific consensus about climate change. Of course, it's unlikely Mathez could have foreseen that the show would open during a presidential election in which one side's VP nominee stomps on the very consensus the exhibit was built to promote—but then, all the more reason for an injection of fact into the public discourse. So what does the show look like? (While RB is located in Manhattan, we admit we haven't made the sojourn to the Upper West Side to see it.) According to Science Daily, the exhibit "examines causes and effects of climate change as well as possible ways to slow it down, such as boosting the use of nuclear, wind and solar power," with features like "interactive displays for visitors to pledge to make changes in their behavior, such as buying low-energy light bulbs, recycling waste or bicycling to work." And voting. Related: RB: Rumors Aside, Sarah Palin Is Still Butchering Science RB: Sarah Palin Still Butchering Science, Redux