In case you hadn't heard, it’s Australian Week here in the U.S., a state-run marketing event that has the streets running red with wine, buildings plastered with shots of Russell Crow and the strangely soothing accents infiltrating the airwaves (at least, if you’re in New York or Los Angeles). 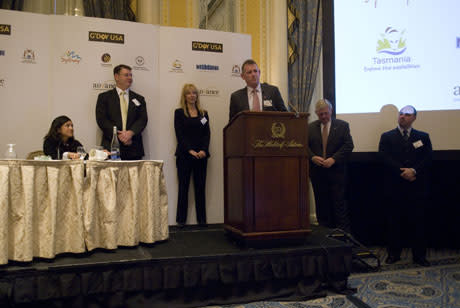 Today at the Waldorf Astoria on Park Avenue, the spotlight was placed squarely on Australian innovation. Six companies assembled for a shot to win money to fund the transition to the U.S. marketplace. The event, dubbed, an innovation “shoot out” had a representative from each of the companies (who were finalists in their respective Australian states) giving a 10 minute presentation on their company with follow-up questions from a panel. No two companies competed in the same market and the ideas varied from wastewater treatment to breast cancer detection. Here is the skinny on a few of the companies from down under that are working on getting a foot into the U.S. market.Freezing Greenhouse Gases Raw natural gas, as it is plucked from under the earth, is actually a mixture of natural gas and Carbon Dioxide, the greenhouse gas that is the bane to climate change and, many believe, will be heavily regulated by business and government worldwide. Before it can be used for power and home use, natural gas must be processed through solvents or membranes, which strip the CO2 and then release it into the air. Cool Energy Limited is betting that this process won’t be acceptable for long and that future regulation will call for the sequestration of the CO2 (That is, long term storage of the gas by pumping it back into the earth). The company has come up with a cryogenic process where the natural gas/CO2 mixture is frozen to negative 90 degrees Celsius and the—now liquid—CO2 is removed. Jessie Inman, Cool Energy’s managing director says that “as Microsoft is to computer world…Cool energy will be to the carbon world.” Before this comes true, they will have to prove that they can move beyond their first successful pilot project in operations, which churned out 2 million standard cubic feet per day without sequestering the CO2, into the typical natural gas field, which can range from from 20 million to several billion cubic feet per day. Don’t trust that carbon sequestration will keep the CO2 underground? Well, this process still saves money, says Inman, and is 20 to 25% less expensive to pump it into the ground than venting it. Correcting Blockbusters Rising Sun Research is going to Hollywood to fix the “wall of TVs problem.” When you walk into an electronics stores and see a wall of televisions, says CEO Clint Walker, you see huge differences in the same image across the wall. For movie-makers, this color disparity is a big problem—one that eats up 15 to 20% of the budget spent on blockbusters. When editing films, not everyone’s screen is the same, and rarely is everyone involved in the same room, so changes on one screen may look quite different than on another (a problem that is often found only after prints are made). But with a simple software fix, says Walker, “the wall of television will look exactly the same.” Rising Sun Research has notably worked on X-Men 3 (fortunately for them, they didn’t write the screenplay) and has a hand in a number of blockbusters and video games to come.Recycling Wastewater Biolytix sells wastewater recycling systems for households, commercial buildings and neighborhood developments. Joe Barnewall, Biolytix’ CEO said that in the U.S. gas costs $3.48 a gallon (which is cheap for an Australian), but the bottled water was $9.30 per gallon. High quality decentralized water (not taking into account regions with high quality public water) should be cheaper, says Barnewall. And he believes his company has the solution—a filtration device that treats and recycles all of a building’s wastewater while saving up to 90 percent on waste filtering energy costs. With 3200 system in Australia, New Zealand and South Africa, Barnewall think it’s time to move to the U.S. Interesting enough, company isn’t marketing the devices as sewage to drinking water yet, due to the “yuck factor” —but not the quality of the water, says Barnewall. For now, the focus is on residential developers who just want to build a cheaper and more efficient waste-water system.Finding Cancer in Hair Last, but not least, Fermiscan, a company with the alternative to the mammogram, stole the show today and, consequently, took the prize money. David Young, managing director touted his company’s unique technique to discover breast cancer with a simple, non-invasive pluck of (dye-free) hair. Once removed, the hair is shipped to one of 40 synchrotron—or a sub-atomic particle accelerator—facilities worldwide where molecular x-ray patterns are compared. It turns out breast cancer can be detected by changes in the structure of hair—so far with 80% accuracy, according to the current 2,000 patient trial. All the imaging work for Fermiscan is already being done in U.S. labs (With a home in Chicago), and with a 7 to 10 day turnaround, the breast cancer detection could prove to be a relatively simple, and more accurate, alternative to a mammogram. That is, unless you dye your hair, in which case you might have to plan to grow out your roots every 4 weeks or so. 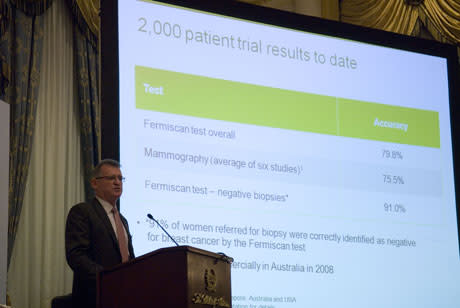