What's Next for the Godfather of 'Guitar Hero'? 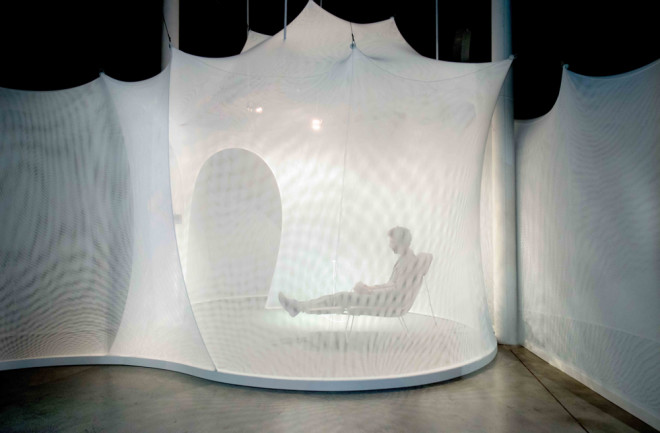 The Cocoon is Tod Machover's latest installation. | Phase One Photography

Tod Machover is more than the godfather of Guitar Hero.

The inventor, composer and MIT professor created the technology behind the popular video game series, but for Machover, music is not just entertainment: It’s a tool with potential health applications ranging from diagnosing early Parkinson’s disease to retraining stroke victims to speak.

Machover’s new installation, called Vocal Vibrations, looks at relationships between the voice and human physiology. It opens at The Lab Cambridge in Boston in October. Machover spoke with writer Cory Ramey for Discover about research that’s just starting to tap music’s potential for improving health.

Discover: A highlight of Vocal Vibrations is the Cocoon, a little room where visitors hold a vibrating orb. How does it work?

Machover: You have a high-quality little microphone that fits over your ear and comes across your cheek. When you pick up [the orb] and make a sound with your voice, you feel your voice in your hands. Every little nuance is reflected in its vibrating pattern.

Why would I want to feel my voice?

M: This is the start of an experiment. My intuition is that by controlling and learning to master the way your voice vibrates, there are all kinds of positive effects, from improving concentration to controlling things like blood pressure and heart rate.

Could your voice really change things happening inside your body?

M: Al Grodzinsky, who is a biomechanical engineer here at MIT, has said that he had a feeling that a regime of vibration exercises might be a really powerful thing to try. So that’s one of the things we’re starting to test.

What about using music for diagnosis?

M: A mathematician named Max Little works specifically on taking the speaking voice and doing signal processing on it, and finding out things about your state of health.

In particular, Parkinson’s disease happens to be something that, before you can diagnose early stage Parkinson’s in any other way, you can literally take someone speaking over the telephone and analyze it really quickly.

Visitors to the Cocoon hold a device in their hands that creates vibrations based on their voice. | Jonathan Williams

Can I get health benefits just by listening to music, a popular idea called the Mozart Effect, which came out of research in the mid- to late ’90s?

M: It’s very hard to measure just pure listening. Most of the papers that have been written in the past 10 years really contradict those findings, and the original research was pretty weak. It was also very difficult to realize what was occurring because there was music in the background, versus quite a few other phenomena.

What do you feel is some of today’s most promising research?

M: There is a wonderful person named Gottfried Schlaug, who has probably the best lab around that does imaging studies and cognitive studies for musical behavior. He has a famous technique called melodic intonation theory, and he is retraining people to speak after they’ve had strokes.

He found that especially for people who have strokes and aphasia — they can imagine things but they can’t speak — those people often can sing a song with the words, but can’t translate that back to speech. Gottfried found that if you teach someone to speak very rhythmically, alternate syllables by a minor third and tap with his prominent hand on every beat, that combination is magical for restoring speech.

[This article originally appeared in print as "Music Man."]