What Is the SOPA Bill, and Why Is It Causing Such a Ruckus? 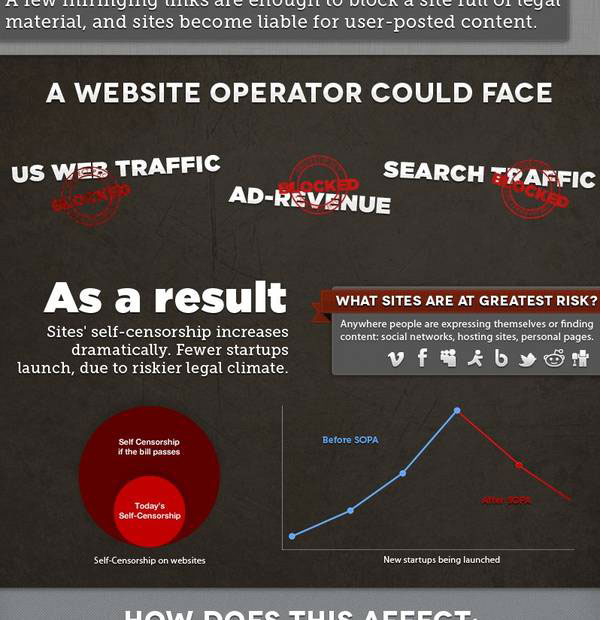 An infographic produced by the organizers of American Censorship Day describes one of the arguments against the SOPA bill.

It's been a busy couple of days

in the discussion of free speech

in the United States, and if you're a regular reader of tech blogs, chances are you've begun to hear about one of this week's issues: the Stop Online Piracy Act

, or SOPA. This bill, intended to help stem online piracy and backed by companies like Disney, Viacom, and Time Warner, has set off the alarms of many sites and companies on the internet because it essentially allows the government and private corporations to censor entire sites that they fear are illegally distributing copyrighted material. Many companies---including Google, Twitter, Facebook, AOL, Zynga, Mozilla, LinkedIn, and Ebay, which took out a full-page ad in the NYTimes with a letter to the congressmembers involved

, and others---have spoken up against the act. Some sites that would likely be among the blocked, including Tumblr, are self-censoring in protest

. A coalition of Internet civil liberty and IP groups declared Wednesday, November 16---the day that hearings began on the SOPA bill---American Censorship Day

and are orchestrating a campaign to have people contact their representatives to speak against the bill. They developed this infographic that explains why they are worried about the bill

(excerpted above). The gist of the opponents' argument is this: While the problem of online piracy is real, the way this law is written, it means that the government may make email companies and internet service providers monitor links you send through email or on social networking sites. It also means that someone from the government or a private corporation can cause a whole site to be removed from Google results and block people from viewing it, as well as preventing online payments from being made to the person who owns the site. It is, essentially, a law that creates a government blacklist, a la the Great Firewall of China. For more details, check out coverage at The Atlantic Wire