What Is the Future of Time?

Our obsession with the clock has driven us to refine and control it—but where does that control end? 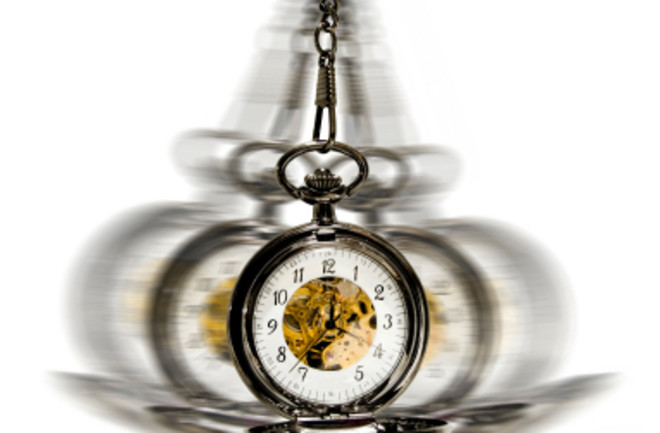 In a music recording studio, just like in a Las Vegas casino, there is no evidence of the passage of time. You work in the dark. There are no windows because windows are not soundproof.

In the absence of natural time, artificial time rules everything that happens in that room. Recording sessions can now take place continents away, simultaneously. For example, say a band has recorded a drum part in Los Angeles but the lead guitarist is in London pretending to go out with Kate Moss. He can go into a London studio, connect via broadband using Pro Tools, which is probably the most common recording software in use today, and lay down a guitar solo that will sync perfectly with the drum part.

Pro Tools synchronizes the two sessions using an artificial time code to establish what sound engineers call positional reference. The code is recorded onto one audio channel of whatever recording device the session is using (these days, usually a computer’s hard drive). In effect, it creates its own time. Anything stored on the device can be precisely located and synchronized by time-code reading devices anywhere, at any time.

What might be called the domestication of time is nothing new, but the pace at which it is developing seems to have recently accelerated. For centuries, because the human race was ruled by the “sunup, sundown” method of timekeeping, the sundial provided a sufficient answer to the eternal human question, “Why can’t anyone ever be on time for anything?” (Maybe because it’s cloudy.) During the Middle Ages, monks—required by monk law to know at what hour a particular prayer was to be performed—needed a more reliable system for keeping track of the time. They developed (or stole the idea from the Greeks, whatever) a clock that worked by allowing water to drip at a nearly constant rate from a small hole in a vessel. This was apparently not good enough: Between A.D. 1280 and 1320, the first references to partly mechanical water clocks show up in church records.

From there it wasn’t a huge technological step to the purely mechanical clock, prodded in large part by the twin developments of the Industrial Revolution (factory workers needed to show up on time) and the railroad (it would be nice if 10 o’clock in London meant the same thing everywhere in England). Next came the pendulum, which is more or less how your grandfather’s grandfather clock operates. We have arrived today at the atomic clock, the one to which “official” clocks are linked. As quantum physics develops, we may yet see even more accurate clocks, which will be useful to astrophysicists trying to fix the coordinates and movements of distant celestial objects.

For us ordinary people, though, the clock is a tyrant. The tyranny of the timepiece has burrowed its way into the fabric of our daily lives—flashing on our iPhones, embedded into every e-mail we send, printed on every ATM withdrawal slip. We never do not know what time it is anymore, and this, I think, is a by-product of our appetite for speed. Many readers will remember the first computer modems, which connected us to the Internet at the then lightning-quick rate of 14.4 kilobytes per second. We may as well have carved our messages into stone and flung them across the country, given the 10-megabit rates now achievable by broadband technology. With an outpouring of data from the Large Hadron Collider, a huge particle accelerator starting up near Geneva, we can look forward to something called the Grid, which will make the Internet seem like a very old man walking his broken bike on the shoulder of the highway.

We are moving from a society desirous of instant gratification to a society of instant anticipation. We no longer want things that can be delivered immediately; we want to move the future forward, toward us, so that the future is no longer a frame of reference for measuring time but a kind of extended present.

I spend part of each year at a friend’s house in rural France, in a region that is populated by more cows than people. My friend’s farmer neighbor, whose family has lived in the same stone farmhouse for hundreds of years, has satellite TV and a broadband Internet connection and insists that both are essential for his business. Not knowing anything about farming, I take his word for it.

There is no longer any pastoral idyll untouched by the speed of things. Television commercials prove this. Ads show people on top of what looks like Mount Everest teleconferencing with their kids back home in what may well be Iowa. Which seems like a long way to go to make a phone call, but that doesn’t seem to be the point of the ad. The point is: There is nowhere you can go that’s far enough.

Artificial codes have erased natural time, and distance, too. The speed of sound is irrelevant; time zones are irrelevant; we can implant code on anything, transmit it over a fiber-optic cable or via satellite, and machines at any spot on the globe will be in sync.

The very notion of “on time” has been replaced by the notion of “in sync.” Everyone, everywhere, seems to be ceaselessly scanning RSS feeds or TiVoing their favorite programs so as not to be left behind, or iSyncing their iCalendar with everyone in their iCompany so that everyone always knows where iYou are, sometimes before you do. The same innovative drive that produced new ways of creating, constructing, and rearranging movies and music compels us to connect everything to everything else. This restless connecting of dots, or rather pixels, may yet solve our human problems. But it is much more likely to create a whole new set that someone else will have to solve. I only hope whoever is responsible for that has enough time.

I just got an IM alert that I can watch a YouTube video of Scarlett Johansson singing a cover of a Tom Waits song. Five years ago that sentence would not have made sense. Five years from now children will laugh at its hokey out-of-date technocultural references. For the foreseeable future, I expect—like most of us—to be running late.

Over the years, humans have found increasingly efficient ways to ration the day into smaller—and more precise—units.

3500 through 1500 B.C. The earliest clocks Mechanism: The sun’s movement across the sky, water dripping from a vessel, candles burning down through marked increments Error: Extremely large and variable Accurate enough to: Schedule religious ceremonies

1200s through 1920s Mechanical clocks Mechanism: Balance wheels, weights, or pendulums Error: From 2 hours per day in the 1200s to 1 second per year (1921) Accurate enough to: Coordinate military activities and standardize trains

1920s through the present Quartz clocks Mechanism: Electrically induced vibrations of quartz crystal Error: From 10 seconds per day for a cheap watch to 0.3 second per year Accurate enough to: Measure variations in the rotation rate of the Earth

1949 through the present Atomic clocks Mechanism: Microwave resonance of atoms Error: From 1 second every 300 years in 1955 to 1 second in 70 million years (2001) Accurate enough to: Synchronize GPS satellites