What Is Hyperloop and When Will It Be Ready?

Early tests show that hyperloop technology can work quickly and safely. Is it coming to a city near you anytime soon? Here's everything you need to know about the super speed train. 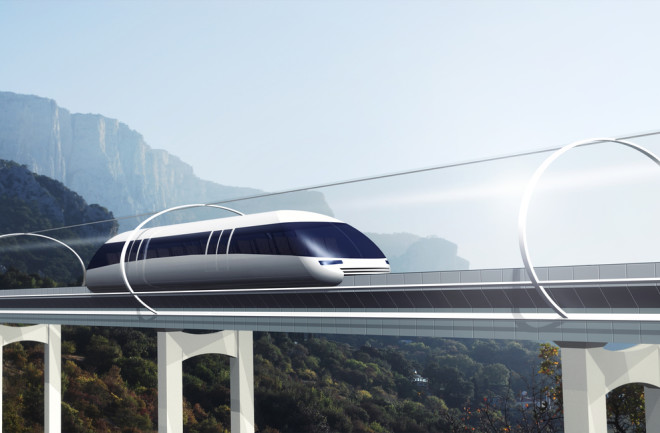 The two passengers strapped into their seats inside the gleaming white interior of the Pegasus as the pod lifted into the airlock. In the time it takes to finish reading this paragraph, the pod accelerated to 100 miles per hour (160 km/h) down a length of track, before delivering its first passengers to a safe stop. The ride lasted only 15 seconds and was in no danger of breaking any land-speed records, but Virgin Hyperloop One nevertheless made history as the first company that has successfully tested hyperloop technology.

A hyperloop, as you may have heard, is a super speed ground-level transportation system in which people could travel in a hovering pod inside a vacuum tube at speeds as high as 760 mph (1220 km/h), just shy of the speed of sound. Virgin's system includes magnetic levitation, much like the technology used in advanced high-speed rail projects in Japan and Germany.

As a concept for fast transportation, vacuum tube transit systems have been around for a surprisingly long time. In 1845, Isambard Kingdom Brunel, an engineer in Britain and the Elon Musk of his time, proposed building a tube in southwest England that would propel trains at a then-dizzying speed of 70 mph (110 km/h). The project proved unfeasible due to lack of materials that would sustain it, and Brunel’s concept was abandoned.

Despite Brunel's efforts, it was more than a century before Tesla and SpaceX CEO Elon Musk turned the world’s attention back to tubular transit technology. In 2013, he published a 58-page technical paper that outlined the design of Hyperloop, a solar-powered transportation system, which he described as "a cross between a Concorde, a railgun and an air hockey table."

Musk claimed that the vehicle could make the 350-mile (560-kilometer) journey between Los Angeles and San Francisco in just 35 minutes for $20 a ticket and estimated the cost of the infrastructure at $6 billion. He also said that the new transit system should be safer than any current mode of transport, immune to weather and resistant to earthquakes. Musk never devoted many resources to making the project a physical reality but released his Hyperloop Alpha as an open-source design for universities and companies to research and develop.

In 2014, Virgin Hyperloop was founded on the premise of making Musk’s vision of a futuristic transportation system a reality. The company has made substantive technical changes to Musk's initial proposal and chose not to pursue the Los Angeles–to–San Francisco route the billionaire envisioned. But Virgin wants to keep the futuristic vehicle environmentally friendly, with vegan leather seats and some of the pod materials made from recycled content.

How Does a Train-in-a-Tube Work?

At its core, a hyperloop system is all about removing the two things that slow down regular vehicles: friction and air resistance. To do away with the former, the pod needs to hover above its track, making hyperloop a magnetic levitation (maglev) train.

To put it in the simplest terms, maglev trains use two sets of magnets: one set to repel and push the train up off the track, and another set to move the floating train ahead, taking advantage of the lack of friction. Once two sets of magnetic waves are established, they work in tandem to push the vehicle forward, says Sam Gurol, former director of Maglev Systems at General Atomics, an energy and defense corporation based in San Diego, California.

“The advantage of maglev is that it allows you to go to very high speeds, in addition to having a very nice ride quality,” Gurol says. “It’s like riding on a magic carpet.”

The super speed of hyperloop, however, is achieved through drastically minimizing air resistance. Passenger pods move through a low-pressure sealed tube, which contains vacuums that suck out nearly all of the air. The air pressure inside the chamber is so low that it mimics the conditions of being at about 200,000 feet (61,000 meters) above sea level. By virtue of being in a tube, the system is protected from the weather and can operate in almost any weather conditions.

Although the technology addresses problems of friction and air resistance, hyperloop projects have suffered from a different kind of drag: economics. Financial and transportation experts have expressed the belief that Musk’s $6 billion price tag dramatically understates the cost of designing, developing, constructing, and testing an all-new form of transportation. Leaked financial documents in 2016 suggested that Musk’s Hyperloop would cost as much as $13 billion, or $121 million per mile.

Like any form of transit, hyperloop transport carries inherent risks, and contingencies for any unforeseen disasters still need to be engineered into the system. At high speeds, even a small earthquake or the slightest breakage of a vacuum tube would pose a significant danger to passengers and crew. In addition to safety assurance, a hyperloop system must offer the kind of pricing that would draw paying passengers away from current modes of transportation.

With large-scale projects like this, good engineering needs to co-exist with good politics. Back in the 1990s and early 2000s, Gurol’s company collaborated with a German firm Transrapid to build a maglev-based high-speed train from Las Vegas to Anaheim. In 2007, former U.S. Senator Harry Reid (Nevada), became the Senate majority leader and decided the state had more important priorities.

“That’s the kind of political change that can just reverse any progress. Hundreds of engineers and fifteen years of work, and the project just died.” Gurol says.

According to Financial Times, in 2018, Saudi Arabia pulled its $1 billion deal with Virgin Hyperloop after the company’s ex-chairman Richard Branson criticized the kingdom over the disappearance of journalist Jamal Khashoggi. Still, as of May 2019, the company had raised $400 million from private investors and plans to begin commercial operations in 2030 (pushed back from early predictions that envisioned a passenger-ready hyperloop in 2021).

Besides Virgin, the companies working out the hurdles of this transportation method include the Hyperloop Transportation Technologies (HyperloopTT), a U.S.-based startup that signed an agreement in China to build a test track, Hardt Hyperloop in the Netherlands and TransPod, a Canadian company.

Until these companies raise hundreds of millions of dollars in funding, acquire the massive tracts of land needed for a viable system, and prove that the system can be operated safely, hyperloop remains a near-future dream.