"What Is Champion?" IBM's Watson Seals Its Jeopardy Victory 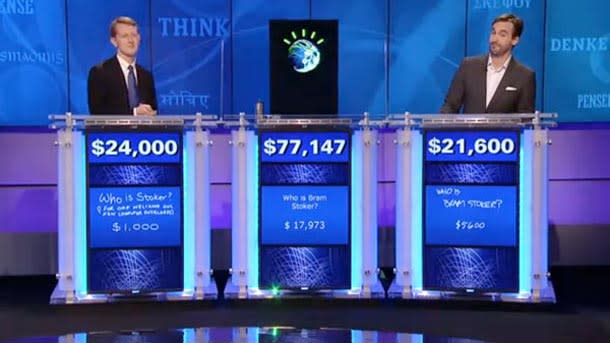 The scores (and the facial expressions of the beleaguered humans) say it all: Last night on Jeopardy, IBM's Watson supercomputer completed its dominating victory over former champs Ken Jennings and Brad Rutter. The carbon-based life forms managed a few correct answers during the final game of the three-day match, but not nearly enough to overcome Watson's smarts and speed.

Facing certain defeat at the hands of a room-size IBM computer on Wednesday evening, Ken Jennings, famous for winning 74 games in a row on the TV quiz show, acknowledged the obvious. “I, for one, welcome our new computer overlords,” he wrote on his video screen. [The New York Times]

Jennings, who spent much of the three-day extravaganza grimacing with frustration at not being able to buzz in ahead of Watson, wrote up his experiences for Slate today

. Once the machine acquired the human skill of parsing Jeopardy questions, he writes, there was really no stopping it. If Watson knew the correct response, it was going to ring in first.

Jeopardy devotees know that buzzer skill is crucial—games between humans are more often won by the fastest thumb than the fastest brain. This advantage is only magnified when one of the "thumbs" is an electromagnetic solenoid triggered by a microsecond-precise jolt of current. I knew it would take some lucky breaks to keep up with the computer, since it couldn't be beaten on speed. [Slate]

The breaks didn't come. Watson made a few mistakes, including an embarrassing one in yesterday's Final Jeopardy

. But the machine never wagered too much and lost, while the humans had few chances to catch up via Daily Doubles. For now, IBM gets to enjoy a victory lap, and the folks behind the game show get to enjoy a bump in publicity (though from now on, the humans who play the regular game will be competing for second place in the Jeopardy

pantheon). The excitement to come is seeing how question-and-answer computers like Watson could find their way into our everyday lives.

Last night the talk was about how Watson would improve the automated phone systems that banks and airlines use. IBM's technological miracle will soon be integrated into our lives, just like those other remarkable inventions - Google's search algorithm, for instance - that we use everyday but barely notice. [New Scientist]

Related Content: DISCOVER: Who’s Smarter, A Human Or a Computer? Round 9: Jeopardy