What Every Lonely Guy Needs: A Fake Facebook Girlfriend 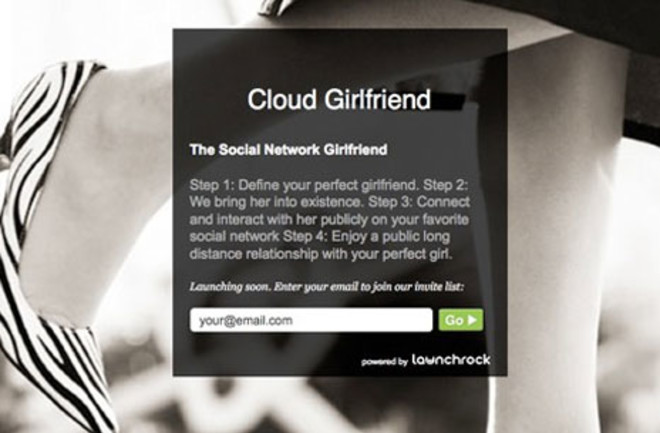 Some guys only dream of having a Facebook girlfriend; others are willing to pay a company to create one for them. Soon, lonely dudes with extra cash may feel better about themselves as they interact with a "virtual girlfriend," convincing their friends that they actually are dating material. A startup called Cloud Girlfriend plans to provide a service that would post messages on your Facebook wall from a virtual girlfriend (or what they call your "social network girlfriend”). The process is simple: "Step 1: Define your perfect girlfriend. Step 2: We bring her into existence. Step 3: Connect and interact with her publicly on your favorite social network. Step 4: Enjoy a public long distance relationship with your perfect girl." Currently the website only allows visitors to provide their emails in order to know when the service actually launches. According to Technology Review's Christopher Mims, despite having not even started yet, "it's already experiencing overwhelming demand." So what are the benefits of having a virtual girlfriend? According to company co-founder David Fuhriman, having a fake girlfriend may help men get a real one: Women seeing that at least one other woman likes this guy may start thinking that they should too. And as he told Business Insider, he also believes the service can boost self-confidence and fulfill our human need for intimacy (with virtual people, I guess). Human needs or no, Cloud Girlfriend is setting up shop in a precarious part of town: The service would seem to violate Facebook’s terms of service, which stipulate that only real people, representing themselves truthfully, may have accounts. But Fuhriman says Facebook’s already filled with fakers: "There will always be more profiles of dogs and cats on social networks than there will ever be of Cloud Girlfriends."

Discoblog: Map of Facebook Friend Connections Lights Up the World