What Are the Repercussions of Hiring a Robot to Care for Granny? 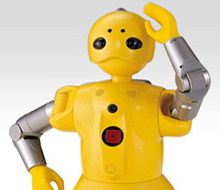 With robotics companies already selling devices that allow us to outsource intimate tasks like caring for children and the elderly, a concerned researcher is advising society to grapple with the ethical implications of relying on robots for personal care now, before the consumer trend goes any further. In an essay in the journal Science [subscription required], robotics expert Noel Sharkey notes that an estimated 5.5 million professional and personal service robots (a category that doesn't include industrial robots) were sold in 2008, and says sales are likely to reach 11.5 million by 2011. Babysitting robots are already on the market:

They make conversation, recognize faces and keep track of kids. They're not a replacement for TV or games, but for personal care — and some researchers worry that kids will be harmed. "If you leave a small child in front of the TV, you have to keep popping in to make sure they're OK. But these are so safe that people will eventually leave their children in the care of robots" [Wired News]

, says Sharkey. No one knows what the long-term effects might be of letting an isolated child depend on a robot for companionship and learning, he says. At the other end of the human lifespan, robot specialists are also being sold to care for the elderly, Sharkey writes.

"Examples include the Secom 'My Spoon' automatic feeding robot, the Sanyo electric bathtub robot that automatically washes and rinses, and the Mitsubishi Wakamura robot for monitoring, delivering messages, and reminding about medicine." Professor Sharkey doesn't see this as a bold new future for the old, either. The increased presence of robots "could lead to the risk of leaving the elderly in the exclusive care of machines," he writes [CNET].

In a completely different arena, Sharkey points out that robots are also an increasing presence

on the battlefield, where lethal robots such as the missile-armed Predator drones used in Iraq and Afghanistan are already deployed with lethal effect. The US Future Combat Systems project aims to use robots as "force multipliers", with a single soldier initiating large-scale ground and aerial attacks by a robot droid army [The Independent].

Yet Sharkey frets that no computational system can distinguish between combatants and innocent people. He says that scientists and engineers who work on such projects should be mindful of the uses to which they'll be put, and argues that international groups should set guidelines for how robotic warriors can be deployed. Related Content: 80beats: The Latest Robot From Honda: A “Walking Assistant” to Push You Upstairs 80beats: Computers Take the Turing Test for Artificial Intelligence, But Fall Short 80beats: Autonomous, Snooping Robots Almost Ready for the Front LineImage: Mitsubishi