What a Robot 'Cambrian Explosion' Means 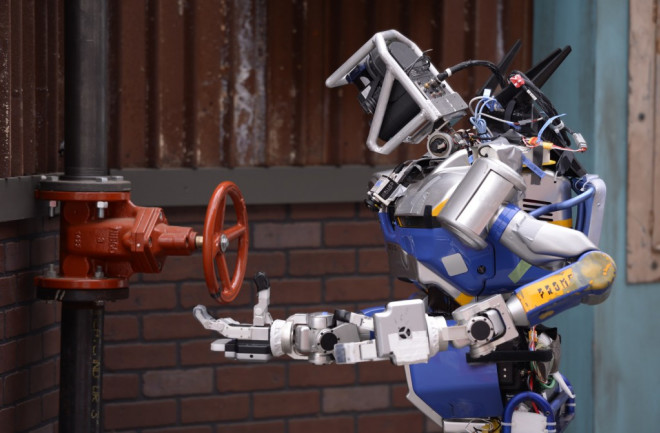 The humanoid robot HRP2 made by a team from Tokyo participated in the 2015 DARPA Robotic Challenge. Credit: DARPA Half a billion years ago, Earth's animal life rapidly evolved during the event known as the Cambrian explosion. In the future, growing swarms of robots all talking with one another could spark a similar "Cambrian explosion" for robotic evolution. A robotics expert who has worked for the U.S. military recently published a paper on the technological changes that could rapidly spawn the next generation of robots powered by advanced artificial intelligence. He also weighs the consequences of robots rapidly replacing huge numbers of human workers. Two technologies could play the biggest roles in rapid robot and AI evolution, according to Gill Pratt, who has served as robotics program manager for the U.S. Defense Advanced Research Projects Agency (DARPA). First, "Cloud Robotics" could allow robots to share experiences and knowledge through wireless connections and the Internet. Second, "Deep Learning" algorithms allow robots to learn from experience and apply those lessons to more general scenarios. Together, they could lead to more capable robots with the AI brains to handle many more jobs currently done by humans, according to Pratt's paper published in the Journal of Economic Perspectives. "While a Cambrian Explosion in robotics promises to improve the human condition dramatically, it also looms as a disruptive economic force, in part because of its much-discussed potential to make certain human jobs redundant," Pratt writes. "Yet there is reason to embrace the pending robotics revolution despite such concerns."

They Took Our Jobs

The Cambrian explosion of robotics could lead to swarms of capable robot workers replacing many human workers in a very short time. That rapid change could easily have a disruptive effect by leaving many people jobless and without much value to offer to the new economy. Eventually, a robot-driven economy might actually satisfy the traditional human demand for goods and services and eliminate the demand for additional labor. Such a world might end up looking like today's music business; an economy that offers "superstar wages" to a few highly talented people and only pays low levels of income to the rest. Still, Pratt points to a few possible ways out of humanity's future dilemma. First, some human services and products will probably sell for higher prices than cheaper robotic alternatives. Today's examples include hand-crafted goods and live music tickets that sell for higher prices than machine-made goods or music recordings. Second, everyone might end up owning their own robot worker and enjoying leisure time. But achieving that utopian-sounding ideal would require some initial plan for distributing "robot capital" among humans. Third, future humans might earn money by selling their "personal preferences" as potential customers. Many tech companies already use online tools to collect and sell information about our personal preferences to advertisers. But a future information economy might enable some way for us to regularly receive payment in exchange for our changing personal preferences.

Such considerations may seem far off in the future. But Pratt devotes most of his paper to describing progress in data storage, battery energy storage, electronics power efficiency, computation power and other technological areas that could help spark the Cambrian revolution in robotics. He also mentions the significant amounts of money tech companies have poured into developing better robots and AI. "The timing of tipping points is hard to predict, and exactly when an explosion in robotics capabilities will occur is not clear," Pratt writes. "Commercial investment in autonomy and robotics—including and especially in autonomous cars—has significantly accelerated,with high-profile firms like Amazon, Apple, Google, and Uber, as well as all the automotive companies, announcing significant projects in this area." The U.S. military and other government agencies have also been pushing the boundaries of robotics research. During his time with DARPA, Pratt oversaw the U.S. military's DARPA Robotics Challenge. This summer, the contest awarded a total of $3.5 million to the most capable robots from teams around the world in 2015. Such robots had to demonstrate their capability to handle physical tasks such as turning a valve, tripping circuit breakers, climbing stairs and even driving a car. In the end, nobody knows exactly when a Cambrian explosion in robotics could happen. But some AI researchers have begun looking to past examples of abrupt leaps in technological progress for clues about the future of AI and robots; they're even paying "research bounties" worth between $50 and $500 for historical examples. Their hope is that a sudden rise of AI won't catch humanity completely by surprise.