In order to protect supply lines, the U.S. military is making a big push into green energy, from biofuel-burning planes to geothermal-powered bases to an all-green carrier strike group. 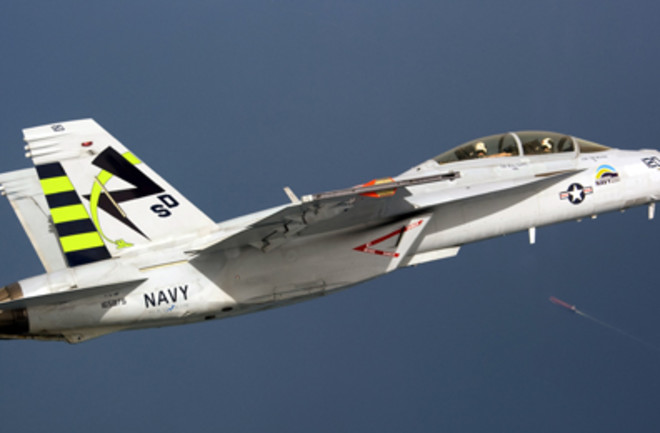 In 2006 an urgent request came from the top U.S. military commander in western Iraq. Rather than asking for more tanks or troops, Marine Corps Major General Richard Zilmersaid he needed “a renewable and self-sustainable energy solution” for forward operating bases and combat outposts. Outfitting bases with solar panels and wind turbines, he argued, would reduce the need for fuel-bearing convoys, which are vulnerable to attack and which draw soldiers away from their core mission.

“That’s the kind of thing that gets people to sit up and take notice,” says Alan Shaffer, who served as the Defense Department’s acting director of operational energy. Zilmer’s call for renewables on the battlefield highlighted a growing awareness within the Pentagon that clean energy initiatives are more than just good public relations; they can save lives and make the American military a more effective fighting force.

Both domestically and abroad, security issues are increasingly influencing the way the United States evaluates its energy policies. The Pentagon does not want its military bases to be at the mercy of unpredictable oil-rich nations or volatile price shifts. So in 2006, when Army brass committed $5 billion for construction at Fort Bliss in El Paso, Texas, they made a new approach to energy one of their priorities (pdf). The base’s utility bill currently runs about $14 million per year, and Major General Howard Bromberg, former commander of Fort Bliss, says that projections had showed annual costs reaching $90 million by 2025. But the Army saw an alternative future, in which wind, solar, and geothermal power could provide enough electricity for the entire installation by 2025 and keep annual costs nearly steady. “We can do solar 365 days a year,” Bromberg says, “and we have wind potential on the mountains.” Additionally, tests from the 1990s found a large geothermal source—a hot aquifer with 190 degree water—sitting beneath the base’s training grounds. Fort Bliss engineers are evaluating the site for a proposed 10-megawatt geothermal plant.

Other branches of the military are moving in the same direction. Navy Secretary Ray Mabus proposes cutting petroleum use in non-tactical operations by 50 percent and shifting half of the Navy’s total energy supply to alternative sources by 2020. Speaking at the Center for National Policy last May, Mabus noted (pdf) that previous energy transitions—from sail to coal power, coal to oil, and oil to nuclear—met resistance but ultimately improved the Navy’s adaptability and agility. By reducing reliance on fuel convoys and increasing domestic control over the Navy’s energy supply, he said, the current shift will do the same. “We are moving toward alternative fuels in the Navy and Marine Corps for one main reason, and that is to make us better fighters.” Six years from now, a fossil-fuel-free carrier strike group—including a nuclear-powered aircraft carrier, hybrid electric ships, and biofueled aircraft—will begin missions in international waters.

Shoreside, Navy scientists are experimenting with wave power at Hawaii’s Kaneohe Bay Marine Corps base and exploring a promising new technology called ocean thermal energy conversion (OTEC), which uses warm surface water to heat a liquid with a very low boiling point, such as ammonia. The resultant steam runs a turbine, and cold water drawn up from deep in the ocean condenses the steam to start the cycle again. Brian Cable, an ocean energy project manager for the Navy, says this zero-emission technology requires a big up-front investment, but a single unit could produce 100 megawatts of renewable electricity. That high energy density makes OTEC a more attractive option than wave or tidal power, Cable says, especially for distant outposts like those on Guam, where a cost analysis suggests that OTEC could provide electricity slightly more cheaply than existing oil-fired plants. Navy researchers are currently scouting Hawaii’s coastal waters to identify a site for a 5- or 10-megawatt OTEC pilot plant, and Lockheed Martin is working on preliminary designs.

Energy issues are particularly critical for the Air Force: It accounts for more than half of the Defense Department’s fuel purchases, gulping down about 2.5 billion gallons of jet fuel each year. Air Force energy director Dave King hopes that by 2016, 300 million gallons of that total will come from alternative sources such as biofuels, a move that he argues will increase the stability of the force’s fuel supply and reduce its vulnerability to cost fluctuations. “We’re feedstock agnostic—if the market can produce it competitively and it works, we’ll buy it,” he says. This past March, an A-10 Thunderbolt II streaked across the sky near an Ohio Air Force base, powered by a 50-50 blend of standard jet fuel and biofuel made from a plant called camelina. This first-of-its-kind test flight was part of an ongoing Air Force effort to prove that planes perform just as well with biofuel in the tank.

“We will not sacrifice operational performance at the altar of green—but we don’t think we need to,” Alan Shaffer says. So far, so good: The test pilot’s verdict on the biofuel mix was a big thumbs-up.

Fuel Convoy A delivery mission supplying bases and combat outposts with fuel. A single Army convoy can involve 100 soldiers; the wars in Iraq and Afghanistan require about 6,000 long-distance convoys each per year.

Energy Density The amount of usable energy in a system or region.

Camelina An oil-containing plant, also known as false flax, under investigation as a new source of biofuel that has the potential to replace conventional jet fuel.