Welcome to the Hotel Automata 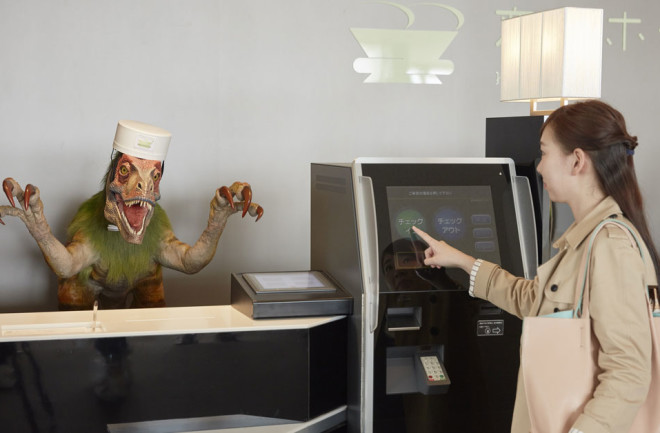 At Henn-na, you can check in with a dinosaur. (Credit: Bobbie van der List) The train ride from Nagasaki to the Huis Ten Bosch theme park in Japan takes about two hours. Along the way, I pass rice paddies and sleepy towns; this is not the place you’d expect to find the country’s first hotel staffed by robots. When I arrive at the Huis Ten Bosch station, I’m surrounded by iconic Dutch architecture and buildings. The theme park was designed to give people in Japan a taste of Europe. I take a shuttle bus to robot hotel Henn-na, located minutes from the theme park gates. Beside the hotel entrance, stands a Transformers-like robot, twice my size, which doesn’t seem to have any practical purpose whatsoever.

The hotel doesn't exactly put out futuristic vibes. (Credit: Bobbie van der List) From the outside, apart from that robot, the hotel doesn’t look like some sci-fi structure. But after entering the front doors, which open automatically, I feel the sense that I’m in another time; this truly is a robot hotel. Robots behind the reception desk, robots clean the windows, there’s a robot cloakroom attendant, a robot luggage trolley and even a robot playing the piano.

Flesh-and-blood human Kotaro Takada, corporate officer at Huis Ten Bosch, greets me in the lobby. He explains that the hotel was built in 2015 in response to changing demographics in Japan. “Japanese society is rapidly aging… a declining workforce is especially affecting the hospitality industry, which mainly consists of young people. If we don’t come up with solutions, the hotel sector will be at risk,” Takada says. “So we accepted the challenge by opening a hotel where the core philosophy is to not be dependent on human staff by utilizing robots.” Tourism to Japan has surged: 20 million visitors in 2015, compared to 10 million in 2014. It was the first time in 45 years the number of visitors outpaced the number of Japanese citizens going abroad. And the hospitality sector in Japan may need to get creative if this recent trend continues. I have a little time to kill, since I arrived two hours before check-in time. In most hotels, there is a special room to store luggage before officially checking in. But not in Henn-na; instead, a mechanical arm helps me store my bags.

The luggage-sorting robot arm. (Credit: Bobbie van der List) Safely tucked away behind glass the cloakroom bot, which looks like something on a Ford assemble line, swivels and pivots after I have chosen an unoccupied box to put my luggage in. The robot arm grabs my chosen box, places it on a tray and I set my suitcase in it. Then, with lighting speed, the robot arm places the tray back in its designated spot. In a matter of seconds, my luggage is safely stored.

Keeping the windows clean. (Credit: Bobbie van der List) “Originally this robot was developed for the car manufacturing industry, produced by a company called Yasukawa Denki. Not that many robots that are traditionally used in the manufacturing industry are applied in the service industry,” Takada explains. “You can consider this to be a test place for the entire hotel management and robot manufacturing companies.” I swing back to the Huis Ten Bosch theme park to pass the time before check-in, and after a disappointing visit – it was pouring rain, typical Dutch weather – I’m more than ready to get my room. At the check-in counter, I can choose to be helped by a humanoid receptionist or one of two dinosaur bots. They can all speak Japanese, Korean, English and Chinese. The dinosaurs are appealing, but I went with Kibo, the humanoid. She talks to me, but I need to use a pen on a touch screen to fill out my name and details. The Japanese people standing beside me check-in via voice recognition.

Not your typical reception desk. (Credit: Bobbie van der List) A man from the Netherlands, Franz, waits with me. He’s visiting Henn-na for the second time. “It is insane to realize you check-in with this lady humanoid and two dinosaurs,” he says with a laugh. “This is the smartest marketed concept I’ve ever come across. It is a very interesting experience to stay in a hotel without any staff.” After checking in I find myself a robot trolley, which carries my luggage to the room. The trolley detects its surroundings using sensors, and once you are more than a meter out of its range, it stops. The idea is that this robot adjusts its speed to your pace, but it’s not perfect. Coordinating with your trolley can be rather tiresome if you just want to go to your room.

I hope my luggage trolley doesn't expect a tip. (Credit: Bobbie van der List) The first time I enter my room, I need to use an IC-card, but then a face recognition system scans and remembers my face. From there on, my mug serves as the room key—hard to forget that on the nightstand. The room is simple and functional: there are very few items and everything can be controlled from just one device: a kawaii (Japanese term for cute) robot on the nightstand. Her name is Churi-chan, and I talk to her to turn the lights on and off. She also functions as an alarm clock and the weather forecaster. My Japanese translator, Chanmun Om, tells me about the time he stayed at the hotel with his son and had to spend 10 minutes in the dark, because his robot assistant couldn't recognize what he said.

Churi-chan awaits my commands on the nightstand. (Credit: Bobbie van der List) The unembellished rooms sort of represent the service you can expect at a robot hotel: no frills, simple. You can’t call the front desk to order a taxi or get tips about the local hotspots. If you aren’t satisfied with the service, you can’t file a complaint through Churi-chan. It’s “human” touches like these that are absent in hotel automata. Henn-na's staff still lack artificial intelligence capable of handling more complex tasks. The most common complaint among guests is the robots’ shoddy communication skills. While Japanese people are more open to robots replacing humans than any other place in the world, they still want the robots to possess human skills. This is the next step for the hotel.

Did you expect any other robot to be vacuuming the floors? (Credit: Bobbie van der List) “Some companies we cooperate with are very far with artificial intelligence they’re testing for us,” Takada explains. “Once we are certain they can be applied in the hotel, we will start using these. Then you can order a taxi, get room service, or tips about a nice café in the area.” In the hallway of the hotel we see a trolley robot struggling. Just before the finish line (the room), an error message pops up on the touch screen attached to the trolley. It informs us to call in the help of a back office staff member—it appears humans are still needed to keep the gears churning. The staffer arrives within minutes and tends to the trolley’s failure. We have a quick chat; she smiles, and disappears to her back office. The hotel management of Henn-na is still hesitant to entirely turn the keys over to robots. As much as I like being served by robots, nothing beats a bit of human interaction.