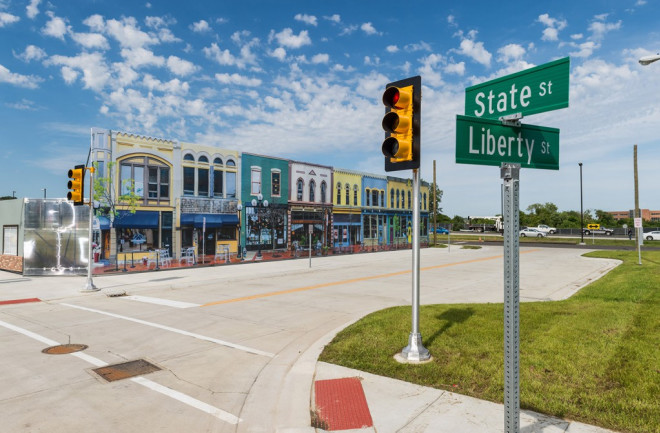 Credit: University of Michigan Sorry, Detroit, but there’s a new “Motor City” in Michigan. On Monday, the University of Michigan announced the founding of Mcity, a 32-acre stretch of land on the Ann Arbor campus that no person will ever call home. Instead, driverless cars milling about Mcity’s urban and suburban environs will represent the “city’s” population. Mcity serves as the first urban environment specifically designed to test and perfect autonomous vehicle technologies before they are mass-marketed.

King of the Hill

More than 100 years ago, Henry Ford’s automobile assembly line helped Michigan firmly plant itself as the heart of the automotive industry. A century later, Silicon Valley has started to lead the way in terms of advancing automotive technology — Google’s self-driving vehicles are already cruising the streets of California, for example. For the “founders” of Mcity, the test facility is a bold move to reassert Michigan’s top-dog status in the future of automobile technology.

“We're not going to let Silicon Valley take this technology away. This is the center of the universe for automotive technology,” U.S. Sen. Gary Peters, D-Mich., said during Mcity’s grand opening Monday. By all appearances, Mcity is a real city complete with traffic lights, roundabouts, construction obstacles, sidewalks, streetlights and even a quaint downtown district. With a plethora of real-world props, researchers and engineers can design myriad traffic scenarios to test self-driving vehicles’ skills. Researchers can even deploy mechanized pedestrians to see how autonomous vehicles react. The $10 million Mcity was planned as a safe place to test the limits of vehicle-to-vehicle (V2V) communication technologies, which will play a key role in preventing collisions. Ford is already testing technology in Mcity, and Honda, GM, Toyota, Nissan and other tech companies have also invested in the facility. Mcity organizers say one of the primary goals of the project is to have autonomous vehicles testing on Ann Arbor streets by 2021.

Just two days before the unveiling of Mcity, LinkedIn founder Reid Hoffman penned a lengthy editorial saying an “asphalt utopia is on the horizon” and it’s time to “accelerate toward a world where self-driving cars are not just allowed but mandatory in the vast majority of spaces.” Before that happens, self-driving vehicles will have to prove they can handle the unpredictable nature of roadways shared by imperfect human drivers and pedestrians. The controlled chaos at Mcity should certainly pose plenty of challenges for driverless vehicles to overcome.