Welcome Back, Egypt: The Country’s Internet Is Back Online 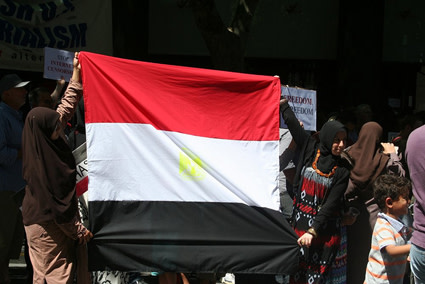 As usual, Conan O'Brien may have said it best: "If you want people to stay at home and do nothing, you should turn the internet back on." The Egyptian government seemingly has learned that shutting down the Internet is no way to get protesters to be quiet, and today it turned the Web back on after protests succeeded in spite of the five-day blackout.

"Egyptian Internet providers returned to the Internet at 09:29:31 UTC (11:29 a.m. Cairo time)," said a blog post by Net monitoring firm Renesys today. Indeed, a variety of Egyptian Web sites, including the U.S. Embassy in Cairo, the Central Bank of Egypt, and the Egyptian Stock Exchange are available. And Twitter activity relating to Egypt is surging. [CNET]

Cell phones are coming back online for many people, too, though it's not clear yet when everything will be fully restored. In the end, the government's attempt to kill the Internet

proved a dismal failure. The world rallied to give disconnected Egyptians ways to work around the blackout, and the suppression of free speech fueled the fire of protest.

The shutdown proved less an impediment than a source of fresh anger among ordinary Egyptians who suddenly lost contact with friends and family overseas. Protesters had no trouble pulling together larger and larger crowds, culminating with an estimated 250,000 people that gathered in central Cairo Tuesday to demand an end to President Hosni Mubarak's three-decade rule. [Wall Street Journal]

Mubarak has now promised not to run for President again. But Egypt has not experienced a return to normalcy quite yet: Some protests and clashes continue today in Tahrir Square

. Don't expect the Egyptian experience to fade from the news even if things calm down: Here in the United States, a group of senators are introducing legislation to give the government emergency powers over Internet providers in case of a broad cyber attack (which some call the "kill switch

"). But now they are trying to fend off criticisms that they want our government to have the kind of power Mubarak used.

"Some have suggested that our legislation would empower the president to deny U.S. citizens access to the Internet," said the statement from Joseph Lieberman (I-Conn.), Susan Collins (R-Maine), and Senator Tom Carper, (D-Del.). "Nothing could be further from the truth." They said, however, that they'll make sure their forthcoming legislation "contains explicit language prohibiting the president from doing what ... Mubarak did." [CNET]

Previous posts on the Egypt blackout: 80beats: After Looting in the Egyptian Museum, Archaeologists Pick up the Pieces