One day you may be able to recharge your phone by plugging it into your clothes. 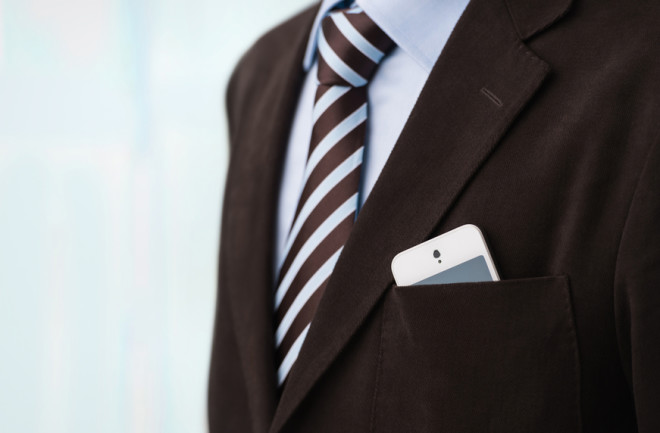 Novel applications for this technology could include things like military gear that powers soldiers' equipment, a literal power tie or suit, and jackets that could charge your iPod during a jog or bike ride. | Hasloo Group Production Studio/Shutterstock

A drained smartphone battery often sends us hunting for the nearest outlet, if there even are any. But within a decade, we might be wearing the outlet.

In a world of fabrics infused with the power of the sun, recharging could be as simple as plugging devices in to our clothes. Helping this potential future along, chemist John Badding and his colleagues at Pennsylvania State University recently embedded solar cells within flexible wires that can be woven into fabric.

Badding's solar cell functions just like a common, rigid kind, but with a fiber-optic housing that enables it to bend into a loop. <ol> <li>Light particles pass through the outer layer, freeing a cascade of electrons through the material.</li> <li>The movement of free electrons and the gaps created by those loosed particles generate an electric current.</li> <li>Electrodes to transfer the power are attached to the solar cell (not pictured). </li></ol>

The flexible wires assume the same basic arrangement as a common type of rooftop solar cell, which contains a negatively charged layer, a positively charged layer and a neutral material sandwiched between them. When photons (light particles) from the sun smash into the outer layer of the rooftop cell, they initiate the photovoltaic effect — a cascade of reactions across the charged layers, ultimately generating usable power.

Badding and his group devised a new way of creating that semiconducting sandwich by starting with a flexible, hollow fiber-optic thread; inner and outer walls of the thread correspond to the positive and negative layers of the common solar cell.

Badding’s team has fashioned these threads into 3-foot-long wires, each thinner than a human hair and flexible enough to be wound into a coil or woven together. “We’ve been able to weave it into a fabric,” Badding says. “Right now, it’s only one layer, but nevertheless it is a fabric.”

The potential applications for solar threads include flexible garments that could draw power from the sun and allow people to recharge their phones and other devices on the run, but Badding notes there are some broader applications as well.

Badding suggests that one of the first parties to get in line for such a versatile and powerful material would be the U.S. military, to weave into soldier’s uniforms and tents.

[This article originally appeared in print as "Solar Threads."]

Solar fibers could be woven together to create sheets of conductive material. | John Badding and Todd Day/Pennsylvania State University
1 free article left
Want More? Get unlimited access for as low as $1.99/month
Subscribe