We Should Toss That $450M da Vinci into a Particle Accelerator 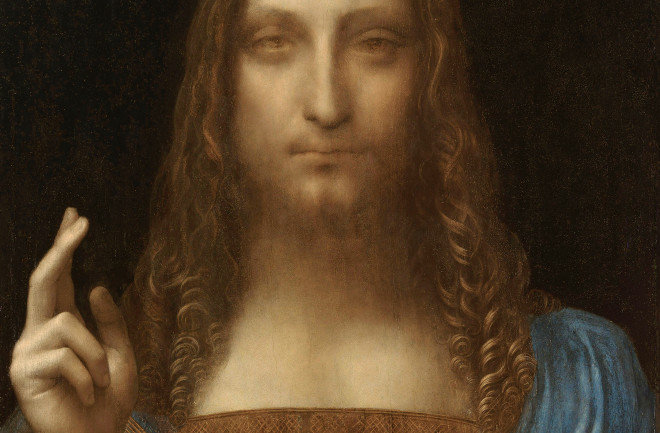 A portrait of the world’s most recognizable person, Jesus Christ, painted by an icon whose renown doesn’t trail too far behind, Leonardo da Vinci, on Wednesday sold at auction for $450.3 million, setting a new record for artistic largesse.

Only a handful of authentic da Vinci paintings exist today, and Salvator Mundi is the only one that could still be purchased by a deep-pocketed collector. Christie’s Auction House billed the work as “The Last da Vinci,” “the holy grail of our business.” And on Wednesday a perfect storm of salesmanship, extreme scarcity, and legendary celebrity inflated the price to unprecedented levels. Salvator Mundi is now the golden standard of value by which all other paintings will be measured.

Todd Levin, an art adviser, told the New York Times, “This was a thumping epic triumph of branding and desire over connoisseurship and reality.”

Consider that 60 years ago this exact same painting sold at auction for a mere £45—adjusted for inflation, that’s about $1,200 today. The price at the time reflected the painting’s dubious history; it was badly damaged and it appeared someone had attempted to restore it. The winning bidder got such a bargain price in 1958 because it wasn’t considered an authentic da Vinci, but instead a painting by one of his pupils.

Since then, the painting’s value has been volatile—fetching a price of $10,000 in 2005 from a group of art dealers, including Robert Simon. After deep analysis, documentation and restoration Simon announced it was unequivocally a da Vinci. It was purchased in 2013 for $127.5 million by Russian billionaire Dmitry E. Rybolovlev.

On top of it all, this painting has also been at the center of legal disputes. Leo is incredibly popular with forgers, and there are at least 20 faked Salvator Mundi paintings circulating. What’s more, the greats like da Vinci and Michelangelo ran workshops where they would often apply the first brushstrokes but left the rest to their assistants to finish.

Christie’s, for its part, said it was up-front about the checkered past of this particular painting, but firmly asserted that the experts have this one right. This is a da Vinci through and through.

“There is extraordinary consensus it is by Leonardo,” Nicholas Hall, the former co-chairman of old master paintings at Christie’s told the New York Times.

Regardless, art scholars and critics still fiercely debate whether da Vinci actually painted it. Jerry Saltz, an American art critic, is among the doubters, as he recently wrote in Vulture:

“I’m no art historian or any kind of expert in old masters. But I’ve looked at art for almost 50 years and one look at this painting tells me it’s no Leonardo. The painting is absolutely dead. Its surface is inert, varnished, lurid, scrubbed over, and repainted so many times that it looks simultaneously new and old.”

German art historian Frank Zöllner also threw some shade on the veracity of this particular painting in his book Leonardo da Vinci – the Complete Paintings and Drawings:

“Firstly, the badly damaged painting had to undergo very extensive restoration, which makes its original quality extremely difficult to assess. Secondly, the Salvator Mundi in its present state exhibits a strongly developed sfumato technique that corresponds more closely to the manner of a talented Leonardo pupil active in the 1520s than to the style of the master himself.”

With $450 million riding on the line, and for the sake of silencing the doubters, shouldn’t we throw some scientific muscle around and make this case bulletproof? Of course, the only person who can do it now is probably just fine taking experts at their word. But if such an endeavor were pursued, scientists would certainly have a battery of high-tech tools at their disposal.

“Portrait of a Woman” as it undergoes scanning with the synchrotron. (Credit: Thurrowgood et. al/ National Gallery of Victoria, Melbourne)

In 2016, scientists in Australia used a synchrotron, a type of particle accelerator similar to the Large Hadron Collider, to blast an original Edgar Degas painting with a high-energy beam of photons. Known as X-ray fluorescence, the technique allows researchers to peer through layers of a painting to reveal hidden gems. In the case of Degas’ Portrait of a Woman, researchers revealed a second woman hidden beneath the first.

Forgers tend to paint over the top of used canvasses, and it was also common practice for artists to do this long ago. If a newer painting were revealed beneath one claimed to be much older, that could flag a fake. Or, if a famous artist only painted on fresh canvasses, any painting hidden beneath would signal a forgery. Applying this technique to the Salvator Mundi, could, perhaps, separate the brushstrokes of da Vinci from the people who attempted to restore the portrait—or reveal it was indeed a student and not the master.

Even the most learned forgery spotter is but a mere human. So Ahmed Elgammal, a professor of computer science at Rutgers University, developed an artificial intelligence system that can recognize an artist based on their individual strokes.

“These little strokes, and the way they evolved, are unintentional signatures of the artist. They are very hard to replicate,” says Elgammal.

These unique signatures are also very difficult to spot with the human eye, which attests to the success of forgers. So Elgammal trained an artificial neural network by feeding it a collection of some 300 drawings, or roughly 80,000 individual strokes, from iconic artists who varied in style. Their experiments showed that the system could correctly identify the techniques of masters like Picasso and Mattise 80 percent of the time. Then, they tried to fool their system with forgeries, but it identified fakes with 100 percent accuracy.

One of the knocks on Salvator Mundi is that the brushstrokes don’t look like da Vinci’s, but rather a pupil’s. Perhaps a well-trained computer could deflate this argument.

Most artists’ don’t whip out masterpieces without a little planning. Like a home-builder, they construct a frame and add to it. In art parlance, these initial markings are known as underdrawings, and artists tend to develop a marking style that’s unique to them. Unfortunately, the finished product masks them from the naked eye.

(Credit: The University of Glasgow)

But using infrared reflectography, art scientists can see what’s below the surface. That’s because infrared light can penetrate the layers of varnish and pigment to reach the drawings beneath. When the light hits the canvas, it’s reflected back into a specialized camera and produces an image of the underdrawings.

This technique is used to determine the composition of pigments used in a painting. The molecular composition of paints has changed over the centuries, and if there are chemicals in a work of art that wouldn’t have existed at the time it was created…a seller has explaining to do.

A mass spectrometer is a specialized device that sorts ions based on their mass-to-charge ratio. Then, after obtaining the molecular masses present in pigments, researchers can match them to the known masses of elements or molecules to elucidate the composition of a paint or varnish.

It’s impossible to know which current artists will be revered like da Vinci in 500 years, but identifying the artist will certainly be easier. For new paintings, the Global Centre for Innovation at the State University of New York at Albany developed a way for artists to insert a bit of synthetic genetic code into the still-wet paint of their masterpiece. Each piece of DNA is then logged into a database.

The DNA becomes entwined with the medium, so it’s impossible to move. To verify a painting, art dealers run a customized scanner over the canvas.

The art world is also beginning to embrace the technology underlying Bitcoin to track provenance. The blockchain is an open ledger of individual transaction records. Every single transaction produces a timestamp that links to the previous one, building a verifiable and hack-proof record. For art dealers, this is a fast and easy way to verify a chain of ownership.

Just a Piece of the Puzzle

Regardless how of deeply the art world embraces technology, it can only take it so far. Verifying a work of art is a three-pronged challenge.

“Scientific technology is helpful in terms of deciding if something is properly dated, but it can’t say whose hand created it,” says Irina Tarsis, found and director of the Center for Art Law.

Ultimately, it’s a combination of these three factors can build quite a compelling case for attributing a particular work of art to its creator. Still, even with extreme diligence, authenticating a masterpiece is still an educated guess—a very educated one at that.

By 2026, it’s anticipated that the wealthiest of the wealthy around the world will drop $2.7 trillion on art. Sophisticated technologies could help ensure it’s money well spent.