We Have Seen the Gadgets of Christmas Future, and They Are Awesomely Strange 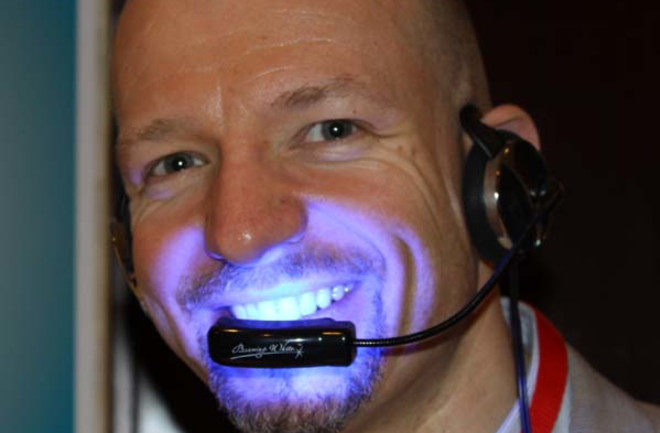 If you feel like Christmas keeps creeping earlier every year, consider the companies who are trying to get their products ready for the holiday season. Yesterday, May 19, many companies showed off their wares at the Holiday Gift Guide Show in Times Square.

There are plenty of new gizmos to buy when the calendar turn to December, don't worry. But we wanted to bring you a few of the delightfully odd or unexpected entries now. Why wait? Some are old, some are new, some are resurrected, and one is, well, blue.

Thanks to the Forever White headset by Beaming White, my dream has finally come true: I can listen to the White Stripes while I whiten my teeth, all without whitening strips.  Just put the hydrogen peroxide gel on your teeth, then strap on the headset and subject the gel to blue LED. All the while you can be pumping music through the headset.

"On the Cuff," the creation of Rana Bauer, was one of the main sponsors of the fair. Just why would a person want to wear orange foam circles around their wrists, you ask? To keep water from running down your arms when they do the dishes or wash the car, of course.

While the cuffs are bit difficult to stretch over larger hands, it doesn't hurt and they fit nicely. And Bauer also sells a T-shaped stand for them to sit on when not in use. And if you're planning to dress up as a robot from 1950s sci-fi, On the Cuff will come in handy as the perfect inexplicable rings around your wrists.

This is an oldie but a goodie. Arkon introduced that LavNav in the early 2000s. It senses someone approaching in the bathroom, and displays either a red glow from LEDs if the toilet seat is up, or a green glow if the toilet seat is down. Arkon VP Aaron Roth tells me that the company stopped making the LavNav to focus on other products, but consumer demand—perhaps from female customers who grew too accustomed to the green glow of safety—led to the product's resurrection.

Some things are just too good to go away.

Hunt and peck typists: You've seen them, scanning the QWERTY formation of letters for the one they need and pecking it with an index finger. Well, for those people who never learned to type on a standard keyboard, or those who haven't yet, Philadelphia's Faith Quintavell created a solution: Her Fast Finger keyboard, with the keys arrayed in alphabetical order. And, if you take the notion to revert to the QWERTY setup, the keyboard will do that at the flip of a switch.

That's not why the Fast Finger is genius, though. In a keystroke of true brilliance, Quintavell made the function keys on top represent chat acronyms like "LOL" or "IMO." Thus, "TTYL," which was already condensed from the  17-keystroke "talk to you later," now requires just one button. Bam!

Simply, as you practice putting, you line up the device with where your putter would strike the golf ball. The laser identifies whether you're bringing the head of the club straight through the zone, or coming in at an angle, which would cause you to miss off to the side.

Go ahead, buy one. Don't make the folks at SmartShoppe have to give you the look: