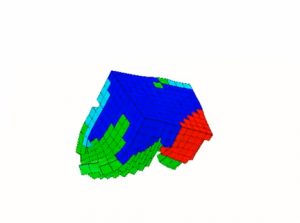 With names like Incher, Jitter and Wings, you know these aren't your run-of-the-mill robots. Through computer-simulated evolution these flexible robots have developed unique gaits. The result is a new source of ideas for how robots could move---and a bizarre but irresistible visual. Researchers at Cornell University and the University of Wyoming wanted to see evolution in action, so they designed a soft robot simulator. They provided the computer program with four materials and one rule. The materials resembled the basic components of our own bodies: bone, soft tissue and a couple kinds of muscle. The only rule governing the system was that faster creatures would reproduce more. Essentially, the researchers incentivized forward motion, so the faster the robot, the more successful it would be in the evolutionary race. Then they sat back and let natural selection do the rest. Over the course of 1,000 generations, this simple set of components yielded some truly kooky concoctions. The robots jiggle, flap and jump at various speeds. They look ridiculous, and may seem counterintuitive, but these squishy robots get the job done. In fact, for comparison, the researchers put scientists to the test, to see if they could design a better robot from scratch, using the same parameters as the simulator. Not a single participant (engineer or not) was able to produce soft robots that outperformed those evolved in the computer simulation. Evolution, it seems, takes the cake yet again. By combining evolutionary algorithms with biological materials, the researchers say soft robotics will go beyond the limits of human intuition and engineering to produce the complex artificial life forms of the future. Watch the wiggly galloping robots strut their stuff in the video below. http://youtu.be/z9ptOeByLA4 Video courtesy of Cornell University and the University of Wyoming.