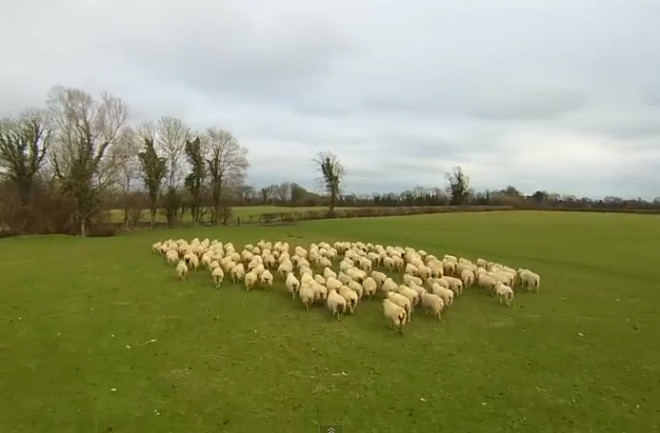 The sheep-herding drone in action. (Screengrab from YouTube) A constant rallying cry for drone technology seems to be: “Anything you can do, drones can do better.” Sheepdogs, this includes you. New footage shows us how a drone can be put to use herding sheep in the rolling hills of Ireland. Like many videos showcasing utilitarian uses for drones, this one also purports to be the first example of a sheep-herding drone. Paul Brennan, whose company specializes in aerial photography for farmers, captured the film. He nicknamed the drone “Shep.”

The film shows the flock of sheep turning and altering course every time the buzzing drone gets a bit too close for their comfort. With a few twists and turns, however, Brennan successfully funneled the flock, about 120 sheep strong, through a narrow gate opening and into a new grazing field.

Across the pond, the UK has progressed toward integrating drones into their airspace, and the number of drones working in British airspace continues to grow. British delivery firm FPS Distribution, for example, recently completed the first test drone delivery, beating out Amazon’s delivery drones in the UK. Amazon has gone on record to criticize the United States’ stringent commercial drone regulations. The United States’ sluggish pace to regulate commercial drone use is good news across the pond where drone regulations are more open. "For commercial growth, it probably does provide an opportunity because companies can do more [in the UK], so they can gauge more of the market and the likely impact," Ravi Vaidyanathan, a senior lecturer in robotics at Imperial College London, told the BBC last week. Drones on the Farm Herding sheep is just one potential job for drones back on the farm. Drones can be used to survey fields for flood and insect damage, water crops or spray fertilizers and insecticides. Farmers can save a lot of time and money by sending a drone into the air rather than paying for helicopters or airplanes. If you want to see how drones are changing agriculture, be sure to pick up the first issue of Drone 360 and look for Steve Sweeney’s article “Planting Seeds.” Despite Shep's sheep-herding success, this is probably not a technique that will take the industry by storm. The National Farmers' Union in the UK didn't think the idea would "take off." Rather, they predicted that drones would be of more use checking in on animals to make sure they're safe. So, not to worry border colllies — your jobs are safe for now.