Watch: Chimps Whack a Drone Out of the Sky 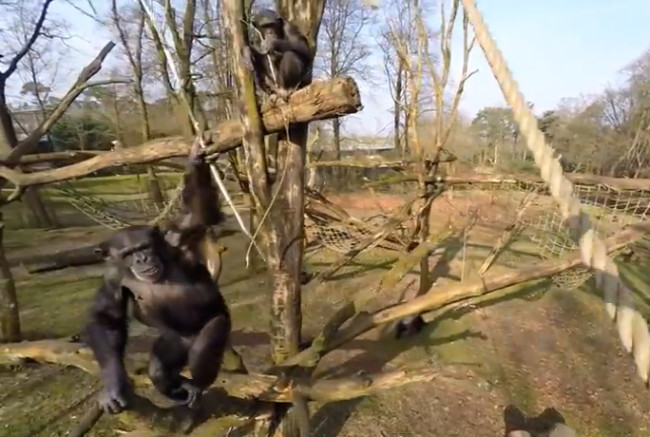 A chimp takes a swing at a drone filming at the Burgers' Zoo in the Netherlands. (YouTube screenshot) We aren’t the only species concerned about the threats to privacy posed by drones. Our closest cousins, evolutionarily speaking, also don’t take kindly to hovering intruders. For the second season of the national television show “Burgers' Zoo Natuurlijk” in the Netherlands, filmmakers decided to launch a drone to get some aerial footage of tenants at the Royal Burgers’ Zoo. Things were going fine until they piloted their craft over the chimpanzee quarters.

As soon as the drone was within sight, chimps inside the enclosure armed themselves with sticks to take down the inquisitive intruder. One of the chimps, armed with a sizable tree branch, climbed into the treetops waiting for the drone to inch closer. As you can see, the drone gets just a tad too close to the action and the chimp whacks the quadcopter out of the sky. The doomed drone fell to the earth, and the rest of the chimp family made certain it would never fly again. Fortunately, the drone was equipped with a scrappy GoPro camera, and it kept filming as curious chimps examined the grounded the device. Although the drone was a complete loss, it still helped capture some amazing footage.