Watch an Epic Duet Between Human and Robot 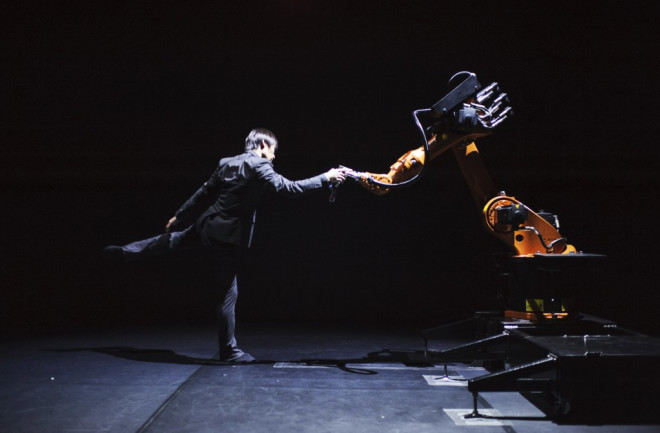 Huang Yi rehearses with robot 'KUKA' at 3-Legged Dog. (Credit: Jacob Blickenstaff) Dance can be defined as "a series of movements that match the speed and rhythm of a piece of music." Notice it doesn't say dance is specific to humans — and this performance proves it. A Taiwanese choreographer, dancer and inventor named Huang Yi programmed and created a robot to dance with. This isn't the first time machines and humans have shared the dance floor — Cirque du Soleil choreographed a magical sequence filled with twirling, flying drones that looked like lampshades. But something's different about Huang's and his robot's (called KUKA) performance. It evokes a sense of intimacy, of struggle, of reliance. https://www.youtube.com/watch?v=Q-sK-s_TzN0 In this video of the duet, the two move effortlessly, seeming to become one. Well, until Huang transitions to the floor and KUKA stays put, continuing its arm movements. At the end, Huang and KUKA finally recognize each other for what they truly are: man and machine, coexisting and collaborating. According to a 2016 story in The Sydney Morning Herald, Huang says he sometimes forgets KUKA is a robot. During a performance last year, he said he forgot his dance moves (hey, we're only human): "At that moment, KUKA led the dance and I followed. It felt really special, as if he was alive, took my hand and told me to trust him and we finished the performance together.''