Watch a Monkey Control a Wheelchair With Its Brain 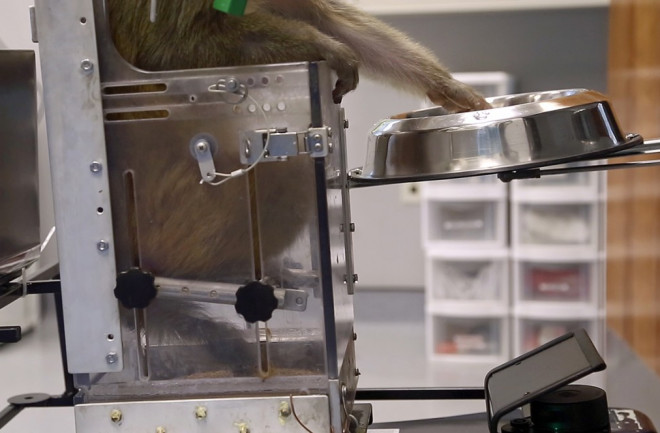 A rhesus macaque reaches for a treat while perched atop a wheelchair it controls with its mind. (Credit: Shawn Rocco/Duke Health)

This a motorized wheelchair is so simple, even a monkey can drive it.

In another step forward for the field of Brain-Machine-Interactions (BMI), researchers from Duke University's Medical Center have taught a monkey to operate a wheelchair using only its brain. The system uses an array of microwire electrodes implanted in the monkey's skull to read its brain activity and translate those signals into physical commands.

Such technology may one day give patients suffering from paralysis or ALS the ability to control machines with their thoughts — replacing damaged bodies with adaptive robots.

The project was led by researcher Miguel Nicolelis, who has already taught monkeys to control mechanical arms with a similar system. He also constructed the mechanical exoskeleton that allowed a paraplegic to make the opening kick at the 2014 World Cup. Nicolelis' most recent project moves beyond limbs and involves moving the whole body through space, a process that requires heightened spacial awareness and more complex calculations.

Nicolelis used two rhesus macaques for his experiment, each with some 150 tiny electrodes implanted in their cortex. The monkeys possessed full use of their bodies, but were confined to the wheelchair for the purposes of the experiment. These particular monkeys are old hands at mind control — they've had implants in their brains for over three years. Nicolelis attributes his implants' longevity to their flexibility, which allows them to bend and grow with the brain.

To calibrate their BMI, researchers "taught" the system what movement looks like in a monkey's brain. To do this, they moved the wheelchair autonomously with the monkey in it while recording the critter's brain activity. Certain patterns in the brain correlated with specific movements. Once they had built up a "library" of movements and their associated patterns in the brain, the researchers gave the monkey full control of the wheelchair.

While the monkey couldn't move its arms or legs, it could still think about moving. When confronted with a reward, a bowl of grapes, the monkey would try to reach it, sending telltale brain signals to the BMI device. By reading and interpreting those commands, the wheelchair moved in fits and starts toward the goal. Nicolelis' wheelchair demonstration was carried out in 2013, and was published Thursday in Nature's Scientific Reports.

Learn New Abilities on the Fly

With more practice, the monkeys made it to the tasty grapes in less time and with fewer deviations from their course. What's more, the researchers report that the monkeys developed new patterns of brain activity while performing the experiment. When the monkeys got closer to their reward, their brains got more excited, something that was not observed before they began using the wheelchair. Working backward, the researchers found that they could predict how far away the monkeys were from the reward, just by looking at their brain activity.

An illustration of the experiment. The cap on the monkey's head transmits brain activity to a computer. (Credit: Rajangam et. al/Scientific Reports)

By developing a new ability while using a BMI, the monkeys demonstrated the brain's plasticity, or its knack for adapting to new situations. For this type of technology to work for humans, we too will have to think of the machine as an extension of our own body, essentially incorporating the wheelchair into our conception of ourselves. By learning this skill rather quickly, the monkeys prove that our brains are up to the task. Speaking to Gizmodo, Nicolelis says that human trials are the next step for him.

“We’re going to go for it now,” he said. “We’re ready with the technology so we’re preparing to apply for human implants. We’re finally there after 17 years of research. I think we’re ready for it.”