Want Your Kids to Read More? Get 'Em a Robot 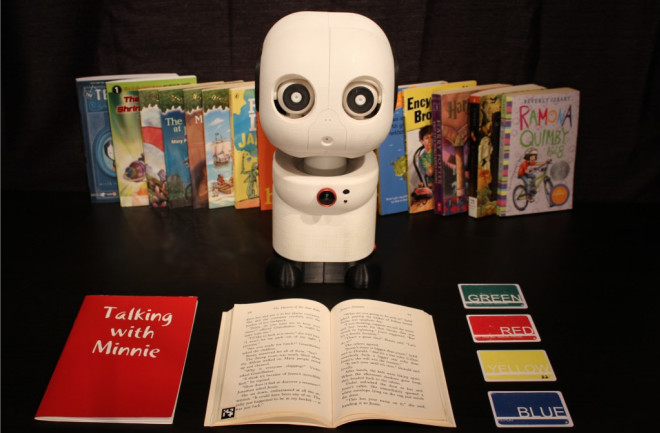 Behold, Minnie, the artificial reading companion. Look at those eyes. Who wouldn't want to read to a face like that? (Credit: Michaelis and Mutlu, Sci. Robot. 3, eaat5999 (2018)) Back in the day, if parents wanted to encourage their kids to read without, you know, actually reading with them, educational TV programs like Reading Rainbow were the way to go. Now, robots might do the trick, according to a new paper in Science Robotics. It’s Reading Robot Researchers from the University of Wisconsin-Madison studied the effects that a robot reading companion had on a group of 24 kids ranging in age from 10 to 12 years old. The team programmed the bot, which they named Minnie, to make thoughtful comments on whichever book the kids picked. And to make her seem even more thoughtful and life-like, Minnie fidgeted and averted her gaze when she was talking. To see how her presence might impact the children, the researchers split them up into two groups. One group, the control group, read on their own at home and did a guided reading worksheet. The second group of kids, though, read aloud to Minnie, who guided them through their stories. Ultimately, all the children liked reading. But, those who read to Minnie had fewer negative things to say about their experience. They also said the lil’ bot helped them better comprehend their books and inspired them to read more frequently. So, it seems robots can help kids learn how to read good (and probably learn how to do other stuff good, too). But there was a hiccup. Over the course of the study, which lasted two weeks, the time those in the bot group spent with their noses in pages dropped off a bit. The authors say the dip is likely due to some technological errors the bot encountered. Still, they argue that companions like Minnie could be valuable at-home learning tools once robots start taking over the world hit the mainstream. Welcome to the future. Bleep bloop.