Want the City to Fix a Crater-of-Doom Pothole? There's an App for That 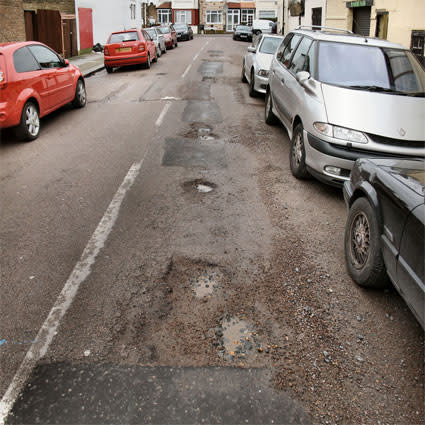 Doing good is getting easier. Soon, you'll be able to do your civic duty of reporting potholes without even lifting a finger. The city of Boston is working on a smartphone app that would automatically report potholes to authorities--making it easier to find and fill the more than 19,000 potholes Boston grapples with each year. The in-development Street Bump app uses a smartphone's GPS and accelerometer technology to register the moment when a car lurches into a pothole and to identify the location. No need for the driver to call or email city officials, the app just goes ahead and sends the message on its own. The engineers behind the app--who hail from the Boston mayor's office of New Urban Mechanics, the Worcester Polytechnic Institute, and the Santa Fe Complex--believe Street Bump will make city driving easier, and will save city government some headaches. As the Boston Globe reports:

Currently, most potholes are identified by DPW repair crews dispatched to drive until they find them, Boston Public Works Commissioner Joanne Massaro said. Roughly one in every six potholes that the city fills is reported by the public, via an e-mail, a call to City Hall, or a report made on Citizens Connect, which allows smartphone users to send the city pictures, descriptions, and locations of problems such as graffiti, potholes, and faded crosswalks.

The annual pothole battle costs the city $2 million, so you can understand why officials want to simplify at least part of the process. But are smartphones up for the challenge? From the Boston Globe:

The application relies on two components embedded in iPhones, Android phones, and many other mobile devices: the accelerometer and the Global Positioning System receiver. The accelerometer, which determines the direction and acceleration of a phone’s movement, can be harnessed to identify when a phone resting on a dashboard or in a cupholder in a moving car has hit a bump; the GPS receiver can determine by satellite just where that bump is located.

The app isn't quite ready to save the streets yet. In the coming months engineers plan to test and refine the app, teaching it to recognize and ignore sewer grates, speed bumps, and other non-pothole objects. And if you're handy with software, watch out for the InnoCentive.com Street Bump challenge in the near future: The programming team that comes up with the best app improvements will win a $25,000 prize. Related Content: Discoblog: The Secret Knowledge of Taxi Drivers Could Be Added to Online Maps Discoblog: iPhone App Lets You Tell Drivers Exactly What You Think of Them Discoblog: Speed Bumps of the Future: Creepy Optical Illusion Children Discoblog: Android... in... Space! A Smartphone Prepares for Blast-Off Discoblog: Sinned Lately? There's a Vatican-approved App For That