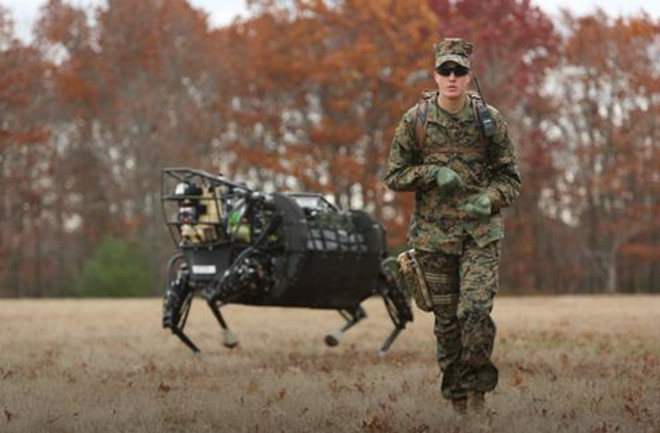 PFC Marcus Beedle leads the mule-like robot known as the Legged Squad Support System on a patrol through open terrain at Fort Devens Mass. Beedle, working with other Marines from 1st Battalion, 5th Marine Regiment learned how to control LS3 and work it into basic formations and maneuvers during the limited technical assessment at Fort Devens. Credit: Photo by Kyle Olson A four-legged robotic mule that underwent years of field trials with U.S. Marines may never see action on future battlefields after being rejected as too noisy. But the U.S. military's ongoing interest in walking military robots capable of moving like headless animals or even bipedal humans will almost certainly lead to other future prototypes. Several versions of the robotic mule--made by Google-owned company Boston Dynamics--were built and tested for the purpose of carrying up to 400 pounds of equipment for soldiers and Marines. The U.S. Defense Advanced Research Projects Agency (DARPA) and the Marine Corps Warfighting Lab collaborated on testing the robot's capabilities in obeying voice commands and automatically following infantry during foot patrols through rough terrain, according to Military.com. But the loud gas-powered engine on the largest robot, called LS3, ultimately represented a deal breaker. Marines were also unsure about how they might repair the robot if it broke down in the field. "As Marines were using it, there was the challenge of seeing the potential possibility because of the limitations of the robot itself," said Kyle Olson, a spokesman for the Marine Corps Warfighting Lab, in an interview with Military.com. "They took it as it was: a loud robot that's going to give away their position." Boston Dynamics did produce a smaller and much quieter electric-powered version of the robot called Spot. That robot could move much more quietly, but lacked the LS3's autonomous capabilities to automatically follow humans, navigate tough terrain and obey voice commands. It also could only carry about 40 pounds, which doesn't help much in solving the combat load problem for overburdened Marines and soldiers. https://www.youtube.com/watch?v=TFNSGjHs_do So why did the U.S. military push for robotic mules in the first place? It's part of a broader effort to lighten the combat loads carried by individual soldiers and Marines on foot. Such loads can easily exceed 100 pounds when accounting for weapons, body armor, food and water, batteries and equipment. In extreme cases, some unlucky Marines end up carrying up to 170 pounds. The heavy loads prevent soldiers and Marines from moving quickly during firefights and take a huge toll on their health in terms of limb and back injuries. “Musculoskeletal injuries are the number one medical issue for the Department of Defense when it comes to encounters and evacuations from [the battlefield],” said Richard Shoge with the Army Medical Research and Materiel Command’s Military Operational Medicine Research Program at Fort Detrick, Maryland. The robotic mule project has currently reached the end of its DARPA contract. Future development of the robots for military purposes appears unlikely unless one of the U.S. military branches coughs up more money. Additional uncertainty comes from the fact that Google has stated it wants to move away from developing military robots under the existing contracts it inherited by acquiring Boston Dynamics and other companies, BBC News points out. The tech giant has also been reorganizing its robot companies, including Boston Dynamics, under the umbrella of its Google X research lab. https://www.youtube.com/watch?v=RDZu04v7_hc Still, Marc Raibert, founder of Boston Dynamics, suggested that his company's robotic beasts of burden have not necessarily reached the end as far as military applications. In an email exchange with Beta Boston, Raibert pointed out how each generation of the robots had reduced their noise levels by 10 to 20 times compared with predecessor robots. “They are not as quiet as people and animals, but LS3 is about as quiet as a typical motor vehicle, such as a car or Humvee, and Spot is quieter," Raibert told Beta Boston. DARPA's interest in walking robots has gone beyond just the four-legged variety. In 2015, the U.S. military research agency hosted a DARPA Robotics Challenge intended to test the capabilities of bipedal humanoid robots in a variety of real-world situations. The aim was to push for humanoid robots that could effectively navigate vehicles and buildings like humans. Ideally, such robots would even have the coordination to handle tools in accomplishing certain tasks. It doesn't take a huge leap of the imagination to see how such handy robots, capable of going wherever humans can go, might prove handy in a battlefield scenario. Unfortunately, the two-legged robots had much more trouble with keeping their balance and recovering from falls compared with the rugged Boston Dynamics robots, as Popular Science pointed out. The Robotics Challenge contests generally fell far short of completing DARPA's initial goals of having robots that could get into and drive human vehicles, clear away rubble from doorways, climb ladders, or use power tools to break through a concrete wall and create an exit for themselves. https://www.youtube.com/watch?v=dv9Wm20UrcU So the year 2015 didn't prove a breakthrough year for walking military robots. But even the smallest robotic baby steps may bring the world a little closer to the capable science fiction robots of "Star Wars," "Ex Machina" and other Hollywood films.