Wait, What Happened in Cuba? 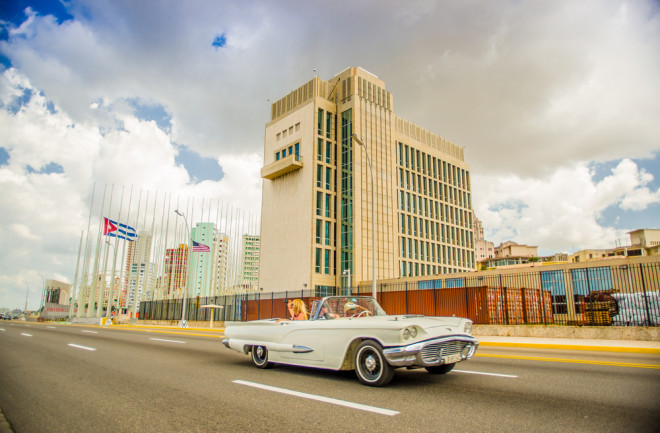 The American embassy in Havana, Cuba. (Credit: Shutterstock) U.S.-Cuban relations have taken an unusual turn after several U.S. diplomats, and at least one Canadian diplomat, experienced hearing damage after being targeted by a covert “sonic device” in Havana. Huh? A what? On Wednesday, U.S. officials who spoke to the Washington Post on the condition of anonymity revealed that in the fall of 2016, at least five U.S. diplomats began experiencing unexplainable hearing loss and other physical symptoms while serving at the embassy in Havana—so severe, they returned home to the U.S. for medical treatment. One U.S. diplomat will need to use a hearing aid as a result of their injuries, CNN reports. After an investigation lasting several months, U.S. officials concluded that diplomats had been attacked with some sort of covert, sophisticated sonic weapon that operates outside the range of human hearing. In retaliation, the U.S. government in May expelled two Cuban diplomats from the embassy in Washington, although it is not known to what degree Cuba was involved with the attack or whether it was intentional. The Cuban Ministry of Foreign Affairs firmly denied any involvement in the affair. Since restoring limited ties with the island the 1970s, U.S. and Cuban agents have on occasion engaged in reciprocated harassment of each other; using an infrasonic weapon to deafen a diplomat, however, is truly unprecedented. And as this story marinated for the past few days, one question still looms large: What the hell is an infrasonic weapon? Does one even exist?

Sound is simply a vibration that propagates as a pressure wave passing through a medium like air or water. Just as the human eye can only detect a narrow range of the electromagnetic spectrum, we only hear sound waves in the 20Hz to 20kHz range. Infrasound waves travel at a frequency below 20Hz, and although we can’t hear them, those pressure waves still rattle the rest of the body—sometimes with bizarre side effects. In the 1980s, Coventry University engineer Vic Tandy started having strange feelings while working in the research laboratory of a medical manufacturing company. While in the room, he felt depressed and occasionally experienced cold shivers. He also had an unshakable feeling that he was being watched, and he would even see people—or something—out of the corner of his eye. He wasn’t alone; other people in the lab also reported seeing strange shadows. So Tandy and Tony Lawrence launched an investigation to explain these “hauntings.” In a paper published in the not-so-elite Journal of the Society for Psychical Research called the “Ghost in the Machine,” Tandy and Lawrence traced the origin of their ghostly visions to an extractor fan in the lab that was resonating the room at 18.9Hz, which happens to be the resonant frequency of the human eyeball. The vibrations, they concluded, caused strange hallucinations. When they turned off the fan, the ghosts disappeared, as well. Different parts of the body resonate at different frequencies, and infrasound waves can penetrate the body, stretching and shrinking liquid- and gas-filled organs and tissues at resonance. At roughly 130 dB, pressure distortions in the inner ear can affect hearing by causing the cochlear fluid to slosh around. Turn up the intensity, and the waves can cause nausea and physical discomfort, but this would require a powerful instrument to achieve. Of course, the military has developed numerous sonic devices to disperse crowds and incapacitate enemies.

The U.S. Defense Department has developed Long Range Acoustic Devices (LRADs) that blast a tight beam of deafening noise at a target. In 2005, pirates off the coast of Somalia tried to attack the U.S. cruise ship “Seaborn Spirit.” When Captain Sven Erik Pedersen pulled out the device, the pirates retreated empty-handed. U.S. police have also used LRADs at the 2009 G20 Summit meeting in Pittsburgh, and during the 2014 protests in Ferguson, Missouri. https://www.youtube.com/watch?v=QSMyY3_dmrM Govern said so-called Mosquito devices are also used as an acoustic solution to loitering. Invented in Wales, these small speakers emit a high frequency sound that can only be heard by young people—the range of audible sound waves shrinks as we age. It’s believed that this annoying sound causes enough discomfort to keep the kids at bay. Technically, sound has been used as a weapon since ancient times, whether it was the war whoops of face-painted armies or battle horns. Sounds can physically and psychologically mess with a foe. But what about the device in Havana? “We don’t know how long the diplomats were exposed, where they were exposed or how. We don’t know if it was a device implanted in the building, or whether its waves were beamed through windows, or if it was even intentional,” says Kevin Govern, a professor at the Ave Maria School of Law in Naples, Fla. who is not involved with the investigation in any way. “This kind of device could be planted in a desk, a credenza, a light fixture, the ventilation system. Or it could be external to a building, and could have been directed like a shotgun mic that is aimed like a rifle.” Govern is also an executive board member for the University of Pennsylvania Law School’s Center for Ethics and Rule of Law, and served 20 years in the United States Army where he got his start in law as an Army Judge Advocate. He writes and speaks about international law and other security issues. “In all likelihood, whatever caused it would not be revealed to the public,” says Govern.

Infrasound Is Another Story

The LRAD and Mosquito are devices that produce audible sound, but evidence that infrasound causes deafness, or has been weaponized, remains scant. Take it from experts who study infrasound and the human ear, who aren't convinced. "There are (sonic) devices that are used as weapons, but none that I know of use infrasound," James Parker, an expert in sound law at the University of Melbourne Australia told CNN. Evidence supporting auditory damage resulting from infrasound is also inconclusive. In 2014, scientists from the Ludwig Maximilian University in Germany had 21 volunteers with normal hearing sit in a soundproof booth. Then, they played a low frequency, 30-Hz sound for 90 seconds. Then, they used highly sensitive microphones to record spontaneous otoacoustic emissions (SOAEs) from participants’ ears after the sound played. SOAEs are high-pitched sounds emitted by the ear, and they change along with a person’s ability to hear. They also disappear when a person loses their hearing altogether. Researchers found that after playing the sounds, volunteers’ SOAEs fluctuated for roughly 3 minutes after researchers played the low-frequency sound. Although their result isn’t a direct indication of hearing loss, it provides limited evidence that prolonged exposure to low-frequency sound could cause damage to the ear. There's no doubt that more research is needed. Alec Salt is a professor in the Department of Otolaryngology at Washington University in St. Louis. His research focuses on inner ear fluids and the effects of infrasound, and he is also skeptical about the efficacy of infrasonic weaponry. “Low frequency sound may cause unpleasant symptoms (sleep disturbance, nausea) but it typically does not damage hearing,” Salt wrote in an email to Discover. “So, I am very skeptical whether it is possible to induce deafness by an inaudible sound. But, then again, I haven’t seen any data related to this specific case.” Whatever happened in Cuba last fall, the Federal Bureau of Investigation would sure like to know.