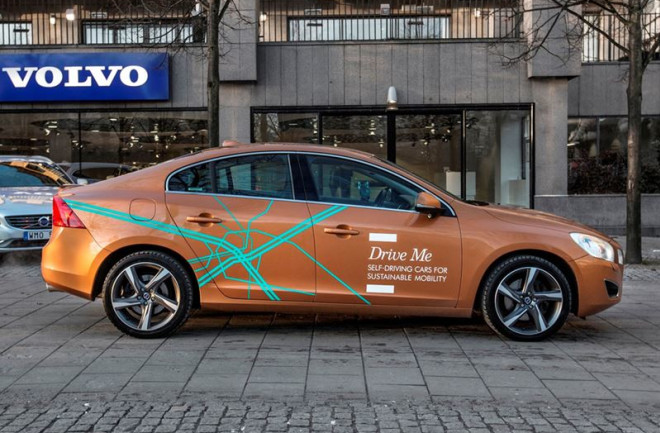 A Volvo self-driving car prototype. Volvo plans to test unmarked self-driving vehicles in London by 2018. Credit: Volvo Most companies testing self-driving cars worry about making sure the driverless vehicles obey the rules of the road and avoid accidents. The Swedish automaker Volvo has a slightly different concern about whether human drivers will try to bully driverless cars on the road. That is why the automaker plans to keep its early fleet of test vehicles in London unmarked so that they don't look any different from a normal Volvo car. The first 100 Volvo vehicles to be tested on London's main roads in 2018 will not stand out from the crowd, a Volvo Cars executive told

(a sister paper to The Guardian). "I’m pretty sure that people will challenge them if they are marked by doing really harsh braking in front of a self-driving car or putting themselves in the way," said Erik Coelingh, senior technical leader at Volvo Cars, in an interview with

Such concerns are not unreasonable. Engineers have generally programmed self-driving cars to err on the side of caution so as to avoid any bad publicity from accidents involving other cars, cyclists or pedestrians. That means their driving behavior tends to be much more mild and rule-abiding than probably the typical human driver. Some companies such as Google have even gone out of their way to make self-driving vehicles that appear mild and non-aggressive. More aggressive human drivers might find it tempting to bully driverless cars that behave mildly. The London School of Economics recently examined how human drivers might behave toward self-driving cars in a survey of 12,000 respondents in 11 European countries. Study findings showed that people who were classified as more "combative" in their aggressive driving seemed to welcome the idea of self-driving cars on the road more than "cooperative" drivers who saw driving as a social experience shared with other drivers. It's unclear exactly why "combative" drivers seemed to welcome the idea of self-driving cars more. But one possibility is that they believe they can have their way with the milder self-driving cars. “[The self-driving cars are] going to stop," says a UK participant in one of the study's focus groups. "So you’re going to mug them right off. They’re going to stop and you’re just going to nip round.” But another explanation is that "cooperative" drivers simply trust self-driving cars less because of the missing social experience. That's actually a fairly practical consideration that includes the wordless communication between drivers making eye contact when switching lanes or at an intersection with stop signs. A similar form of wordless communication takes place between human drivers and pedestrians crossing the road; something that may not exist when people in self-driving cars are busy napping or watching TV. If self-driving cars eventually become trusted companions on the road, even human drivers who prefer manual control might be pleasantly surprised by the results. Some focus group participants envisioned the nice behavior of self-driving cars having a positive "ripple" effect that spreads to human drivers. In the end, that might mean less bullies on the road. “We'll be overwhelmed by niceness," another UK participant says. "They're never going to do anything horrible to us. They're nice cars. They're not going to cut us up or get up our backsides and all the other things”