Visual Science: The Laser to End All Lasers

Scientists are completing the world's largest laser—but will it work? 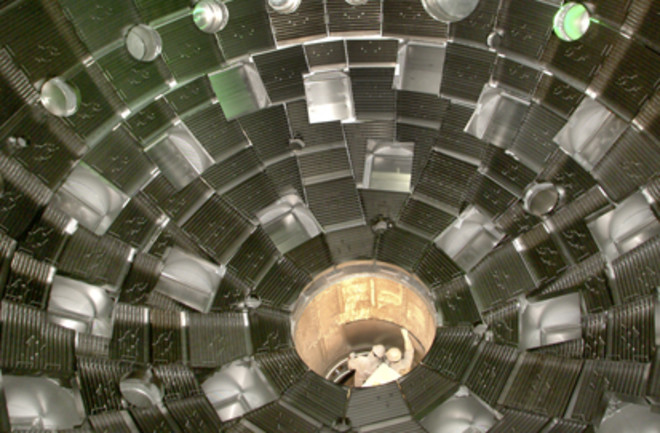 Two researchers head into the target chamber at the National Ignition Facility in Livermore, California, where the world’s largest laser is being completed. The laser, built for fusion research, has already shown the ability to fire 4 megajoules of infrared energy for up to 20 nanoseconds. Shot into both ends of a tiny gold capsule filled with two frozen hydrogen isotopes, this powerful blast will create plasma around the pea-size target in the center of the capsule. The resulting heat, researchers hope, will fuse the two isotopes inside—leading to virtually endless energy. The immediate goals are to test the current optics, which amplify and shape the laser beam, and then to complete construction of the laser by March 2009. Researchers are optimistic that by 2010 they will achieve “ignition,” the point where more energy is coming out than is being put in. We have been hearing this sort of promise from fusion researchers for years, of course, but this time, scientists have a giant laser to help them deliver the goods.