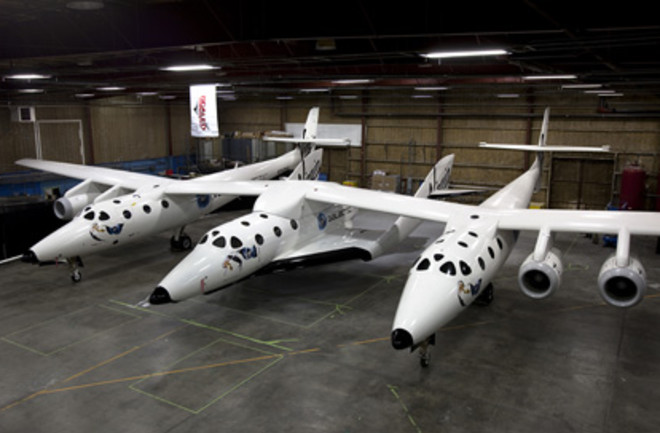 Seating six passengers and two pilots, SpaceShipTwo will begin test flights next year with commercial launchings carrying paying customers starting after government regulatory requirements are met. Tickets for a sub-orbital up-and-down flight are expected to run about $200,000 a seat for the initial flights [CNET]

. SpaceShipTwo, though a technically correct name, isn't a terribly romantic moniker. So governors Arnold Schwarzenegger of California and Bill Richardson of New Mexico will christen the vessel the Virgin Space Ship Enterprise at today's ceremony.

SpaceShipTwo is designed to carry “many thousands of private astronauts into space,” Virgin said today in a statement prior to the unveiling ceremony [Bloomberg]

. However, the gaudy ticket price has some observers, like Roger Launius of the Smithsonian Institution's National Air and Space Museum, convinced that space tourism will remain a distant hope for all but the super-rich.

. Still, the $42 million that Virgin Galactic raised from selling these pricey seats has helped the company ride out the recession. If the sorry state of the economy leaves you longing to leave the planet but without adequate funds, just remember that there are other ways to experience spaceflight. Or, just take Douglas Adams' advice. Related Content: 80beats: Virgin Galactic Unveils Its New Space Tourism Rocket (The White Knight Two, which will carry SpaceShipTwo partway up.) DISCOVER: SpaceShipOne Opens Private Rocket Era DISCOVER: Space Travel For Every Budget DISCOVER: 20 Things You Didn't Know About... Living in Space Bad Astronomy: How Safe Is Space Tourism?Image: Mark Greenberg