VIDEO: New Breed of Robots Can Adapt to Injury 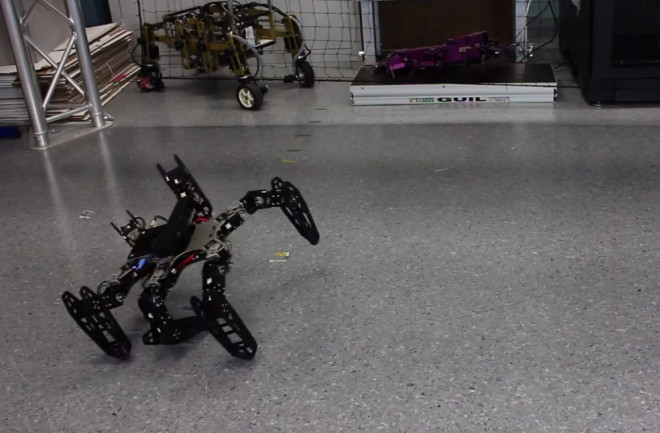 An injured robot learns to walk with its maimed limb. (Credit: Screengrab/YouTube) A new breed of robots have proven that losing a limb or two really is “just a flesh wound." Roboticists Antoine Cully and Jean-Baptiste Moret have built an algorithm that allows robots to detect damage — like losing a leg — and alter their walking motion in order to remain operational. Like an animal that injured its paw, these robots teach themselves to walk with a limp when the going gets tough.

For a six-legged robot, if just one leg malfunctions, it’s game over; all these robots can do at that point is walk in a pathetic circle. But Moret and Cully devised an algorithm that gives these bots the ability to essentially use the scientific method to overcome a problem. When the robot detects damage, it will conduct a series of walking experiments to discover the most effective way to use its limbs to keep moving. The robots will test different limb movement sequences and assess both the strengths and weaknesses of each movement. When they come upon the closest approximation of their original gait, they’ll start walking with a that new gait. Often, robots’ adjusted walking styles look a lot like a wounded animal lurching home after sustaining an injury.

In experiments, robots discovered a new way to walk after just 40 seconds of trial and error. Even when two legs were maimed, the bots could still keep trucking along. Moreover, the adaptive algorithm can be loaded into a variety of robots, and can also help them adapt their gait on different types of terrain. Moret and Cully published their findings this week in the journal Nature.

Moret told Quartz that he hopes his team’s work will make it easier for robots to accomplish their missions in disaster zones. The ability to bend but not break when something malfunctions clearly is a big advantage for robots working amidst the aftermath of a building collapse or forest fire. Of course, there’s a trade-off: If, or perhaps when, robots rise up against their human creators, we’re going to have to work a lot harder to put down that rebellion.