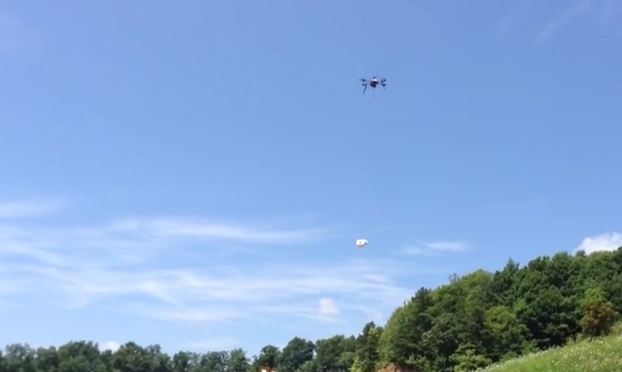 At last, the very first drone delivery was performed without a hitch in the United States. On Friday, July 17, NASA and Flirtey drones delivered medications and supplies to the Remote Area Medical health clinic in Wise, VA. Drone 360's Steve Sweeney was on location to get the full report and sent back this awesome video of the historic event, which occurred as part of Let’s Fly Wisely, a project that aims to find new ways to get supplies to hard-to-reach.

Flirtey’s drone delivered 24 packages of medical supplies to a mobile health clinic, which serves about 1,500 people in the Wise County area. A fixed-wing plane operated by NASA dropped the initial shipment of medicine at the airport, and Flirtey’s autonomous drones completed the final leg to the mobile, which is about 2 miles — by road — from the airport. Those involved with the event have gone on to call Friday a “Kitty Hawk” moment for the drone deliveries. You can read the whole story in the Fall issue of Drone 360, on sale Nov. 3.