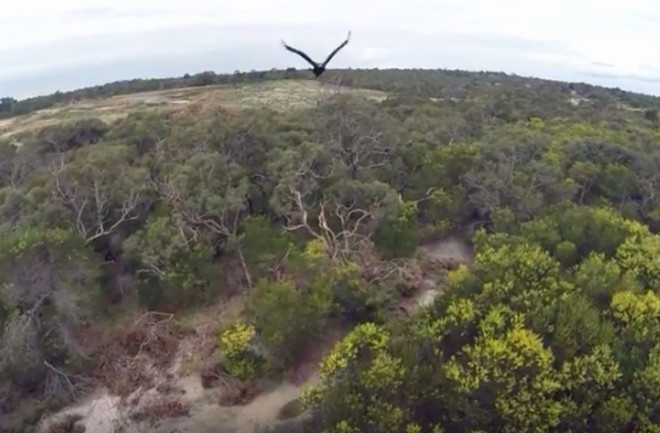 (Credit: Screengrab from Melbourne Aerial Video/YouTube) The wedge-tailed eagle is Australia’s largest bird of prey, and it should strike fear into the heart of drone pilots everywhere. While flying in the Australian bush, Adam Lancaster encountered the aerial predator, which was about 6 feet across from wing tip to wing tip. It’s unclear whether the bird was hungry or angry, but it took Lancaster’s drone out of the sky with ease.

Lancaster posted the video using the Melbourne Aerial Video alias on YouTube. Lancaster isn’t a professional drone photographer; rather, he uses Melbourne Aerial Video as his online portfolio to showcase his work. He’s currently looking to gain employment in drone photography and surveying services, however. Lancaster picked up a valuable lesson after his tango with an eagle. “If you see a bird of prey while flying. Land. I have added this to my operating procedure,” Lancaster wrote in the video description. He’s urging other pilots to avoid sharing the airspace with birds of prey. Predatory birds think the drone is either food or a threat, and they’ll attack. That means your pricey quadcopter could be destroyed, or you hurt the bird. In this case, the wedge-tailed eagle was fine after the encounter. This isn't the first time angry birds have cleansed the sky of our high-flying technology. A gang of birds dive-bombed this guy's DJI Phantom a few years ago:

And geese, who are already hostile toward strangers that get too close, were not happy to see this DJI Phantom buzzing in their faces either.

Birds have ruled the skies for a lot longer than drones, and it appears they aren't afraid to remind us of that fact.