Insoles that could improve balance in seniors are inching closer to market. 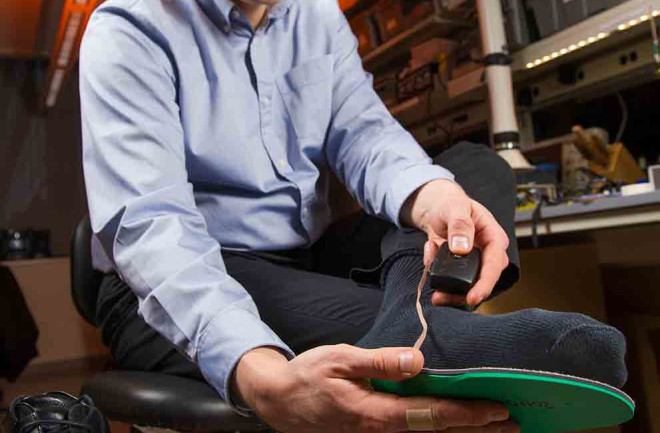 Sign up for our email newsletter for the latest science news
The sleek new version of the balance-enhancing insole can be charged wirelessly. Users can control the amplitude of the vibrations and check battery levels with a mobile app. | Wyss Institute at Harvard University

James Niemi, an engineer at Harvard’s Wyss Institute, knew his team had the prototype right for a new, vibrating insole intended to improve balance when it felt like every other insole on the market.

We all have neurons in our feet that help control balance, but they’re often desensitized in seniors. The result: poor balance and falls. Thanks to past research he’d read about how random vibrations could open up neural ion channels, Wyss Core Faculty member James Collins discovered that those vibrations could improve seniors’ motor control and balance when applied imperceptibly to soles of their feet. In 2013, Discover reported that seniors standing on the vibrating insoles in the lab demonstrated the same balance as people in their 20s.

Since then, Niemi has been working to make that technology into a product people can use. Original prototypes included huge, bulky battery boxes clipped to the shoe. Now, the insole fits into shoes. It can be inductively charged — no cords or wires needed, like those pads you just set your phone on to charge — and a mobile app controls the vibrations’ amplitude and reports battery status.

Despite the progress, the insole isn’t commercially available yet. The Wyss Institute is discussing licensing with different companies, but the question is whether to partner with a traditional footwear company or a medical device company. Niemi believes the product should have FDA approval, a process familiar to medical device-makers, but footwear companies would likely provide better marketing.

Regardless of which route the insole takes to consumers, Niemi believes it’ll have the right look. “When we finally put it on the table, everyone looked at it and said, ‘That looks like a boring insole,’ ” Niemi says. “That’s exactly what we’ve been trying to do.”

[This article originally appeared in print as "Sure-footed Progress."]