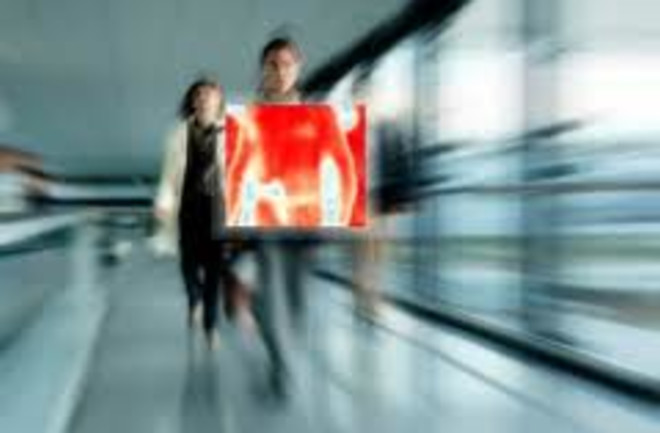 Science fiction movies and TV shows are perpetually trying to see through things: Everyone from Superman to last year's KITT reboot were all using some method or other to see through walls and clothing. Since we already live in the future, see through technology exists in myriad forms, not the least of which is airport full-body scanning. These scanners are so good at seeing past clothing that they might violate child porn laws in the United Kingdom. So now we're in the position of trying to find ways to make see-through-stuff technology worse. Enter the non-ionizing terahertz-frequency radiation. The terahertz range sits betwixt the infrared and the microwave bands of the electromagnetic spectrum. Pretty much everything on the planet emits it, and different objects emit different frequencies. Without any need for an emitter, a receiver could be designed to take pictures in the terahertz range. It wouldn't have sharp lines, but terahertz radiation has a short range, and the emissions vary depending on the object. It would see people as a hazy silhouette. The radiation passes through wood, ceramics, cloth, and paper, but not metal or water. In a short range situation ---- like an airport security scanner ---- a receiver could be installed to watch for the pattern of terahertz radiation. A person's silhouette would show up fine, but a metal knife or handgun would appear as a black outline on the screen. There are already twocompanies with equipment like this ready to sell, and at least one CEO claiming the technology can be tuned to pick up radiation from drugs or other contraband a person might be carrying. Not only would the new technology be safer, and avoid privacy concerns, it might make an airport security guard's job a little better.