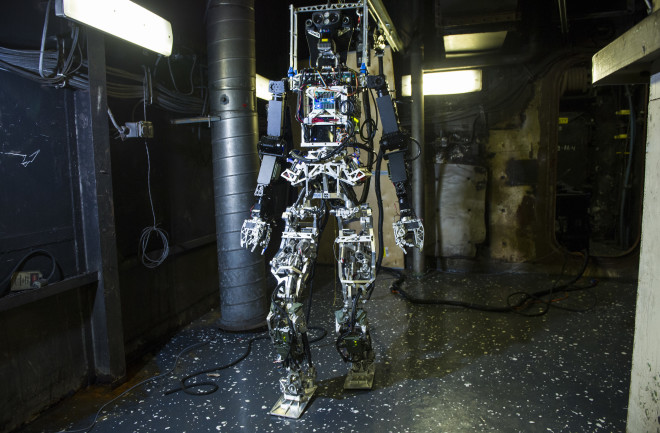 SAFFiR undergoes testing aboard the decommissioned USS Shadwell in Mobile, Ala. (U.S. Navy photo by John F. Williams) Someday, when a fire breaks out aboard a U.S. Naval ship, sailors may bypass the red fire extinguishers and instead call upon the services of a 5-foot, 10-inch, 143-pound firefighting robot. Scientists unveiled the two-legged humanoid robot Wednesday at the Naval Future Force Science & Technology Expo, and we challenge you to find a cooler way to put out a fire. Although the robot has only demonstrated its abilities in a controlled environment, scientists envision a future where human-robot hybrid teams work together as first responders when flames rise at sea.Meet SAFFiR The walking fire extinguisher goes by the utilitarian name Shipboard Autonomous Firefighting Robot, or SAFFiR for short. And the name is no accident: SAFFiR was designed to limit sailors’ exposure to smoke and flames in ships’ tight confines, keeping them… safer (although, technically, researchers pronounce the name like “sapphire”). And, as a man-sized hunk of metal and software, it can do things that humans cannot. SAFFiR is loaded with onboard sensors such as infrared stereovision and laser light detectors, which enable it to find its target through thick smoke. It can also walk, open doors and handle the fire hose. It's also good on its feet: SAFFiR’s whole-body momentum control system ensures he stays upright and functional, even atop rough terrain. In addition to firefighting, SAFFiR would have other duties such as scanning the ship for leaks and identifying malfunctioning equipment. “By taking on these time-consuming tasks, SAFFiR could free up sailors for jobs that more fully take advantage of their training and technical skill sets,” Thomas McKenna, program manager for human-robot interaction and cognitive neuroscience at the Office of Naval Research, said in a statement Wednesday. In a series of experiments conducted in November on a decommissioned naval vessel, SAFFiR identified overheated equipment with its thermal imaging skills, and also extinguished a small fire with a hose — the first bipedal robot to accomplish this task (in a jumpsuit no less). Check out SAFFiR in action:

Since this is a long-term research project, SAFFiR won’t be sliding down the fire pole any time soon. First and foremost, the robot is neither fireproof nor is it waterproof — both are kind of important. SAFFiR is also pretty slow and still operates while tethered to control equipment. Scientists plan to continue improving the robot’s speed, intelligence, communication capabilities, battery life and, of course, work on that whole fireproofing detail. Even with improved intelligence, SAFFiR would still take its orders from a sailor. Although SAFFiR won’t completely replace the need for human intervention during a fire, a robot, rather than a human, would step into the danger zone first, ensuring more sailors return home safely after a voyage. And while SAFFiR is certainly an incredible advancement in firefighting, we can’t help but think this particular photo looks like something straight out of a sci-fi horror flick...