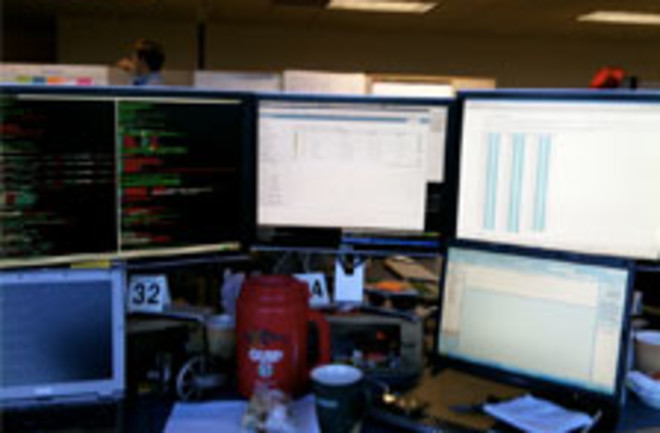 It sounds like the deranged words of a conspiracy theorist: The U.S. military is (not so) secretly creating software that'll generate phony online personae in order to subtly influence social media conversations and spread propaganda. But what may sound like wacky theory is actually wacky reality, or at least will soon be, depending on whether it's already in the works. Dubbed the "online persona management service," this technology would enable a single soldier to assume upwards of 10 different identities. As United States Central Command Commander Bill Speaks told The Guardian, "The technology supports classified blogging activities on foreign-language websites to enable Centcom to counter violent extremist and enemy propaganda outside the US."

Once developed, the software could allow US service personnel, working around the clock in one location, to respond to emerging online conversations with any number of co-ordinated messages, blogposts, chatroom posts and other interventions. Details of the contract suggest this location would be MacDill air force base near Tampa, Florida, home of US Special Operations Command. [The Guardian]

Said to be part of the Operation Earnest Voice (OEV) program, a psychological warfare weapon first used in Iraq to counter al-Qaida's online followers, the goal of this latest project is twofold: To argue against extremist propaganda and to make sure "the world according to the U.S." is heard. As General James Mattis told a Senate committee: "OEV seeks to disrupt recruitment and training of suicide bombers; deny safe havens for our adversaries; and counter extremist ideology and propaganda." He added that Centcom was working with "our coalition partners" to develop new techniques and tactics the US could use "to counter the adversary in the cyber domain".Some have compared these government sock puppets to China's own online controlling ways, though that's probably an exaggeration (you can't even easily view Facebook in China). Others may argue that what the government is doing is necessary, pointing out that none of the undercover personae would be writing in English (they'd be in Arabic, Farsi, Urdu, and Pashto) and wouldn't interact with U.S. audiences (at least in theory). And to top it off, they've ruled out using Facebook and Twitter. The main reason why the government couldn't troll against American citizens is because, well, it's illegal. For example, as The Guardian notes, "Last year a New York lawyer who impersonated a scholar was sentenced to jail after being convicted of "criminal impersonation" and identity theft. So we probably don't have to worry about the government trolling us, though it does raise some questions: What happens, for example, if a Farsi-, Arabic-, Urdu-, or Pashto-speaking American citizen uses the internet? The questions are many, but for now, we're still in the dark: The military is still allegedly developing the project---but if there are some comments below in Pashto, all bets are off. Related Content: DISCOVER: Homeland Insecurity 80beats: Researcher Discovers Effective Profiling; Says It's More Trouble Than It's Worth 80beats: Bioterror Attack Likely in the Next 5 Years, Congressional Report Says 80beats: Super-Sophisticated Computer Virus Apparently Targeted Iran's Power Plants