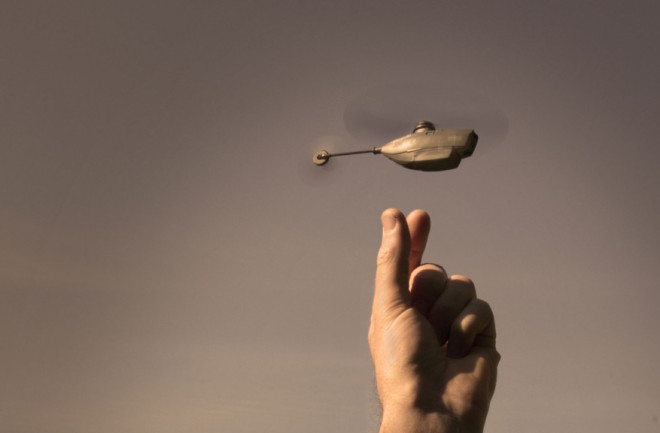 Credit: Proxdynamics Soldiers in the United States Army could someday have a new kind of “eyes in the sky." Since March, an Army Special Forces team has been testing a pocket-sized, lightweight reconnaissance drone that sends video feeds directly to a chest-mounted screen on a soldier’s vest.

Norway’s Proxdynamics developed the minuscule drone, called the PD-100 Black Hornet, and it’s been in wide use among elite British soldiers for three years now. The Black Hornet is the size of a small bird and weighs just 18 grams, or about the weight of three pieces of paper. Despite its small size, the Black Hornet carries three cameras on board, including a thermal camera for nighttime missions. It can remain aloft for about 25 minutes, and has a range of just over a half mile.

But versatility is the main advantage for the Black Hornet. The entire surveillance system fits on a soldier’s utility belt. The drone itself is launched from a small box attached to the belt, and it is controlled with a video game-like controller. Video is then fed to a small monitor that fits squarely on the soldier’s chest. For security, the video feed is stored entirely in a drive on the soldier’s uniform, so enemies can’t see what the drone saw if it is captured.

A Bit Behind the Times