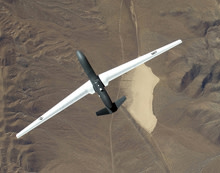 The domain of unmanned spy planes is expanding beyond war zones—last month the British government announced plans to use these flying robots to help out police at home. But here's a more feel-good use for unmanned drones: Researchers at the South African National Health Laboratory Service want to use these robots in the service of medicine, converting them in electronic carrier pigeons to move supplies. South Africa has many remote areas that are difficult to reach, especially when the weather turns bad. So scientists want to send in the robots. The researchers had South African entrepreneur Jaco Davel create a smaller and cheaper unmanned aerial vehicle that could be launched by hand; these unmanned craft could be preprogrammed for landing, or hospitals could control them manually. While these small planes can't carry patients, they can take a patient's samples from a clinic in the rural areas to a larger hospital for testing, allowing the doctors to then advise the local clinic what to do. The modified spy planes have only been test-flown at this point, but the idea is intriguing, and a promising fit for an idea previously used just for espionage. But what if the plane crashes? Don't fear the biohazard, study leader Barry Mendelow says—the samples are all sterilized before takeoff.