Ultrasound Gadget Could Staunch Bleeding on the Battlefield 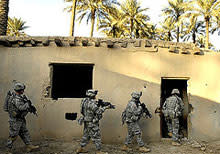 A biotech company is developing an "ultrasonic tourniquet" that could be used to quickly staunch bleeding for soldiers in the battlefield. The company, Siemans Healthcare, announced that it has won a contract with the U.S. Defense Advanced Research Projects Agency (DARPA), which hopes to have a prototype of the device in hand within 18 months.

The hope is that the device, known as the Deep Bleeder Acoustic Coagulation cuff (or DBAC), will be able to non-invasively clot blood vessels and stop internal bleeding from combat limb injuries - the leading preventable cause of death of soldiers in action. Longer term, Siemens believes the technology will also find applications in civilian care [Medical Physics Web].

Siemans says an untrained soldier should be able to operate the device, which would be largely automatic. Once a soldier straps the cuff on an injured arm or leg the machine will take over, scanning the limb for the location and severity of the bleeding. High-intensity focused ultrasound (HIFU) pulses will then be directed at the bleeding, causing the blood to coagulate.

HIFU has been shown to provide an effective method of haemostasis in animal studies, for both solid organs and blood vessels. Moderate to profuse bleeding from major blood vessels, liver and spleen can be stopped within 1-2 min of HIFU application [Medical Physics Web]

. DARPA thinks the Deep Bleeder cuff could be immediately useful for soldiers in Iraq and Afghanistan, where roadside bombs and improvised explosions account for many injuries.

The cuff is intended to lower chances of limbs being lost to severe battlefield trauma, which is an increasingly common situation as improved combat medicine saves more and more soldiers who would previously have died - but often can't preserve their limbs. The DBAC, if it works as intended, should also prevent deaths from haemorrhagic shock [The Register].