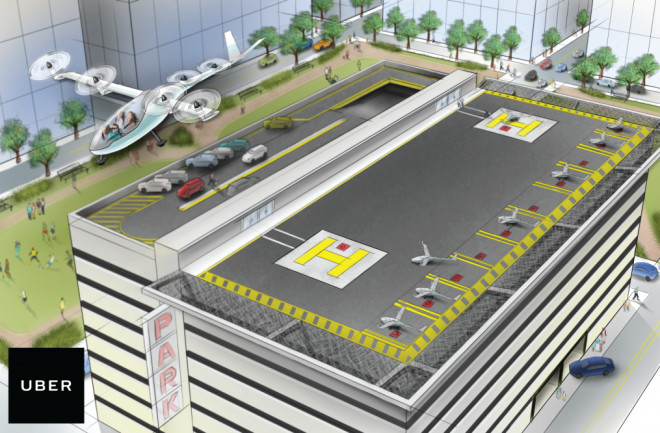 An illustration showing Uber's vision for a flying car service from the top of a parking garage. Credit: Uber Uber wants to usher in the flying car future depicted in science fiction films such as "Back to the Future" and "Star Wars." The company has published a paper explaining how its ride-hailing service could help launch flying cars as a fairly affordable option for commuters. But Uber's plan for flying cars also exposes the company's more immediate challenges in dealing with self-driving taxi competitors. Uber currently gets away with not having to pay the high costs of owning and maintaining a huge fleet of rental cars or taxis. Instead, Uber has built its ride-hailing empire upon its app service that connects drivers with paying passengers. The company's flying car vision seems like a continuation of its existing business model, given that it specifically rules out the idea of Uber producing its own vertical take-off and landing (VTOL) vehicles. It seems clear that Uber wants to continue playing the ride-hailing middleman without having to pay the steep costs of developing and manufacturing flying car technology. "Rather than manufacture VTOL hardware ourselves, we instead look to collaborate with vehicle developers, regulators, city and national governments, and other community stakeholders, while bringing to the table a very fertile market of excited consumers and a clear vehicle and operations use case," Uber writes in a blog post introducing the white paper. Flying cars present a nice, far-off dream for the ride-hailing company. Uber wants to let other companies such as Zee.Aero, Joby Aviation and A3 Airbus invest their blood, sweat and capital into developing the flying car technologies and manufacturing the vehicles. It sees its ride-hailing service and expertise as a way for those flying car companies to earn back the up-front development costs over time through many rides.

A car company like Toyota can compete in San Francisco simply by manufacturing a few hundred cars to get to arrival time parity with Uber. With an investment as low as just a million dollars for a hundred cars, any car company could challenge Uber in their most important markets where they have remained untouchable for years. It has cost Uber tens, if not hundreds of millions of dollars, to win a market like San Francisco and that market will be vulnerable to any car manufacturer willing to invest just a million dollars.

To compete, Uber may have to transform from a ride-hailing service into the owner of a self-driving car fleet. But that move would make Uber into more of a rental car business with all the associated costs of buying and maintaining so many cars, says Maryann Keller, an automotive strategy consultant. Keller believes Uber could still successfully pivot by becoming a self-driving car manufacturer and competing with its up-and-coming rivals.

I’m not saying that Uber isn’t going to be a huge, valuable company. I am suggesting that the path to it becoming more valuable is much less certain than most people think. Navigating this shift will be as difficult and risky for Uber as the transition to mobile was for most consumer internet companies. With great execution, they can come out on the other side even more valuable. A few missteps, and they could just as easily end up as the defining example of the most overvalued company during the second internet bubble.

Uber's ride-hailing data and expertise may still give the company huge advantages over self-driving car competitors trying to elbow their way into the business. But unlike Uber's lofty flying car dream, the war for self-driving car dominance on the ground will be anything but a walk in the clouds.