Tweet Us Not Into Temptaton. OK, Just This Once. 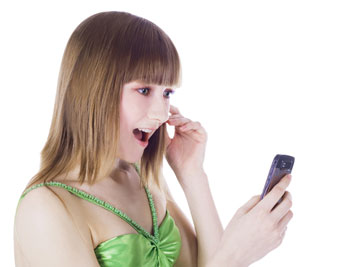 Oh! Oh God, I spent the last 8 hours on Facebook!!

When you text thousands of people seven times a day for a week, and ask them whether they have felt temptation recently, what do you get? A giant database of thousands of tiny vices and people's own admissions---some true, some likely edited for the sake of vanity---of whether they caved. According to researchers who recently performed just such a study, people's biggest willpower failures related to checking things like Twitter or email. People were more able to control sexual urges or the desire to spend money than they were the desire to check social media (though we note that it may take two people contemporaneously caving for certain sexual urges to be considered indulged). Though the paper isn't available online yet for us to check on this

, the researchers told The Guardian

that the number of times people were tempted by cigarettes, coffee, and alcohol was surprisingly low, and that the desire to check social media was much more frequently reported. The fact that media temptation came up so frequently, and was so often indulged, may be because unlike smoking, drinking, or spending gobs of money, checking Twitter or Facebook costs nothing and has no long-term downsides, like lung cancer, or insolvency. Ah, that's what scientists think. But we can tell you: Twitter is time cancer, devouring minutes and hours, indiscriminate in its hunger. Be wary of its cheerful glow and seeming innocence. If you spend your best years bathed in a flow of bite-sized information nuggets, don't say we didn't warn you. Though asking people to tell you whether they snuck a cigarette or checked Twitter isn't a totally foolproof way to get an honest look at the temptation landscape, it sure generates an interesting salad of factoids. But we do wonder about the effects the study method had on the study results. The researchers collected this information through BlackBerrys they distributed to subjects. The devices could do nothing other than receive and send texts to the lab, but what if just having an extra gadget around makes you think more about checking your smartphone?