Turning the "Freight Trains of the Ocean" Into Hybrids

As the fuel crisis continues, container ships look to innovation to clean up their act. 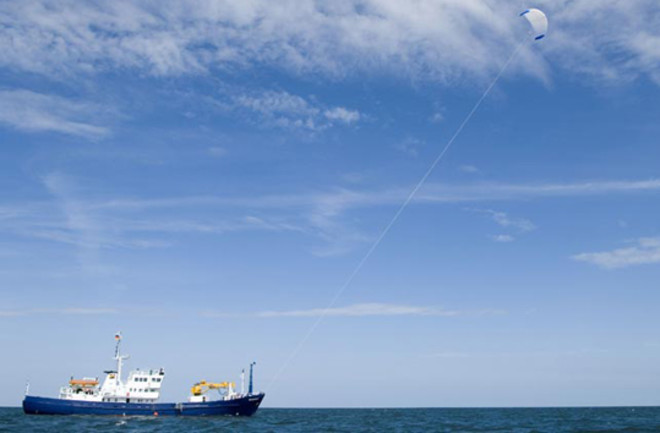 Glance around your living room or office: Almost everything within your line of vision is probably an international traveler. Your iPod. The table lamp your Aunt Betty gave you for your birthday. Your infant son’s diapers. The rug beneath your feet. In all likelihood, each of these crossed at least one ocean within the dark confines of a container measuring 8 by 8.5 by 20 feet, stacked with as many as 10,999 others aboard one of the 4,500 container ships in use around the world.

These quarter-mile-long vessels are amazingly efficient. A single one can move as much merchandise as a 44-mile-long freight train. “We wouldn’t have global trade as we know it without container ships,” says Anne Kappel, vice president of the World Shipping Council.

The cargo-ship concept was hatched by a North Carolina trucking entrepreneur named Malcolm McLean, who outfitted a tanker with universal containers that could be moved directly from ship to truck without uncrating. His ship, Ideal X, completed its maiden voyage after the transformation on April 26, 1956, carrying 58 containers. The industry has grown explosively ever since. Last year, about 141 million containers were loaded onto ships.

For all that success, container ships find themselves on the verge of transformation once again. One reason is the high cost of oil; a large container ship now burns more than $3 million worth of fuel in a 28-day, round-trip transpacific voyage. Pollution is a concern too: Shipping is responsible for 3 percent of global carbon dioxide emissions, similar to the airline industry, along with substantial particulates and sulfur dioxide. At the current rate of growth, CO2 emissions from shipping will double by 2050.

And ships spread more than fumes. The recent infestation of nonnative zebra mussels throughout North American waters was probably started by ships carrying the shellfish in ballast water. Ballast water has also transported cholera and may have contributed to a 1991 outbreak in South America. “The ocean freight industry is facing some issues,” Kappel says. “We are going to need new technologies to solve them.”

SkySails Long before Malcolm McLean’s first cargo ship took to the open waters, merchant traders were unfurling their sails and letting the wind sweep them across the oceans. With the recent dramatic uptick in petroleum prices, that quaint, low-tech approach to ocean travel is getting a supersize makeover by a German company called SkySails.

In theory and function, the SkySail is not so different from its canvas ancestors. It is still a sail, just a really, really, really big one—large enough to help haul a cargo vessel across the water. The prototype SkySail, which completed its first transatlantic voyage last winter, measures 1,700 square feet and can be raised as high as 1,000 feet over the ocean surface to catch the consistently strong winds that swirl above the waves.

The advantage of such a high flying be­hemoth can be summed up in two words: fuel savings.

“In favorable wind conditions, we’ve seen a 50 percent reduction in consumption,” says SkySails’ founder, Stephan Wrage, who dreamed up the concept as a teen. Because the sail can easily be added onto existing ships, Wrage believes that shipping companies will embrace the technology as fuel prices continue to rise.

Currently, the SkySail is practical only on relatively slow ships that travel from 10 to 18 knots, such as tankers, fishing trawlers, and general cargo vessels. Modern container ships travel much faster, about 25 knots, but Wrage has a vision: “We are planning to double the kite area, which will allow even larger, fast ships to utilize the technology.” Sail on.

Ecological Ballast It takes a lot of weight to keep ships stable. Some take on millions of gallons of sea­water in cavernous ballast tanks belowdecks. With that water come plants, animals, bacteria, and viruses that move around the globe aboard the ships, to be deposited wherever the vessels dump ballast to accommodate changing loads.

Engineer Michael Parsons, recently retired from the University of Michigan’s department of naval architecture and marine engineering, has developed a better system, one that eliminates the danger of foreign water release by allowing local seawater to flow through two sets of open channels integrated into the boat’s infrastructure below the water level, running from stem to stern. Natural differences in water pressure continually flush the channels while investing the ballast with optimum stability for any given load. The best part: Because the water flows constantly, it is never expelled very far from where it was taken in.

So far Parsons has demonstrated the technology only on a 16-foot model ship; no company has yet signed on to his radical new approach. “It’s a big commitment,” Parsons admits. “Someone’s going to need to build a whole ship around the design.” That might happen soon. Parsons’s system could save as much as $2 per ton of cargo—a saving that would quickly add up.

Hybrid TugTugboats may look like something out of another era, but they play an essential role in ocean shipping as they push, pull, and prod large vessels into (and back out of) the tight quarters of a port. Given this kind of demanding on-off work, the tug makes a perfect proving ground for an electric-diesel hybrid propulsion system—a heavy-duty relative of the hybrid car—that could eventually spread to every corner of the shipping industry.

“Compared with open-water vessels that spend most of their time at open throttle, tugboats spend up to 80 percent of their time idling,” says John Manison, head of the General Electric Marine and Stationary Power Division. “That load profile is perfectly compatible with a hybrid system.” The hybrid GE is developing with the marine engineering firm C-MAR works something like the upcoming Chevy Volt car, which uses an electric motor as its primary drive and carries a small combustion engine to charge batteries that run low.

Manison believes hybrid technology is ideal for other kinds of ships, too, including offshore supply vessels and those transporting goods by way of coastal and inland waterways.

For now, GE is mum on the system’s most critical components, the battery and the control system. Manison will say only that the company is closing in on a battery that will be able to meet three key criteria: managing the power to match the tug load, performing in adverse weather, and managing the excess heat that builds up during hard use.

GE expects to have hybrid tugs on the water by the end of 2009, but widespread success may depend less on how well the technology works and more on whether it can be applied to existing ships.