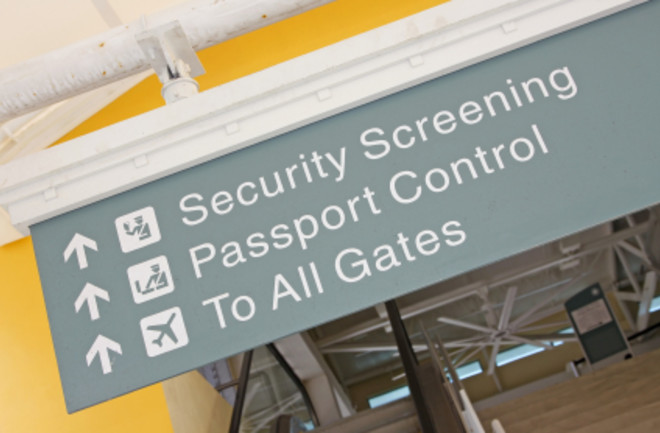 As the backlashcontinues against the TSA's full body scanning and increasingly aggressive pat-downs of those who opt out, the agency has bent a little in one area. The head of TSA today questioned the need to use the added security on pilots. The pilots organization had already told its members to opt out of the scans to avoid extra radiation exposure. Now, the TSA says that as of 2011 pilots will only need to have their airline-issued IDs checked by computer.

“This one seemed to jump out as a common-sense issue,” Transportation Security Administration (TSA) chief John Pistole told Bloomberg News on Friday. “Why don’t we trust pilots who are literally in charge of the aircraft?” That’s exactly the point commercial airline pilots have been making for years. [Christian Science Monitor]

What Pistole did not do, however, was back off the policy of using the scanners on the rest of us. And yesterday on its blog

, the TSA tried to launch a PR counter-offensive to the tidal wave of bad press this week. (Though you might not be terribly satisfied with their answer to the question of whether pat-downs are invasive, about which Ars Technica quips

, "Nowhere in the "Fact" response does the TSA directly answer the allegation of invasiveness, probably because the pat-downs are invasive.") Since the TSA appears disinclined to change its mind about scanning or getting touchy-feely with the general public, lawmakers are beginning to make some noise. In New York, councilman David Greenfield proposed rules to bar TSA from using the x-ray scanners in the city's airports.

Now Greenfield hopes to set off a chain of local legislative action around the country, starting with New York. His legislation would ban the used of the devices anywhere in the New York, including the airports. “We’re not opting out of screening altogether,” Greenfield told Threat Level. “We’re simply banning one type of screening that hasn’t proven effective.” [Wired.com]

Congress is rumbling, too. Today the two representatives who will assume leadership of the transportation committee when the House transfers over to Republican control said TSA's procedures are "overly intrusive."

In a letter to the TSA, Rep. John Mica, R-Fla., and Rep. Thomas Petri, R-Wis. ... said only the highest risk passengers should be subjected to the more aggressive pat-downs. It is the harshest reaction to date on the new searches from key leaders in Congress. "The entire focus of TSA's efforts to improve aviation security needs to be revisited," Mica and Petri wrote in the letter. They accused TSA of reacting to old threats — in this case, the so-called "underwear bomber" who attempted to blow up a jet last Christmas — while failing to be "proactive." [USA Today]

Federal action might be the only way to get the TSA to change its policy. Airports, led by Orlando's Sanford airport, are considering ditching TSA screeners

in favor of private companies. But in its blog post

, TSA sternly reminds all of us that "all commercial airports are regulated by TSA whether the actual screening is performed by TSA or private companies. So TSA’s policies – including advanced imaging technology and pat downs – are in place at all domestic airports." Oh, and we'll be paying more for all of this.

An increase in U.S. airline security fees is among “strong possibilities” being considered to pay for higher costs of detecting terrorist threats, the Transportation Security Administration chief said. [BusinessWeek]

80beats: Airline Passenger Refuses to Be Groped by Security; Becomes a Folk Hero