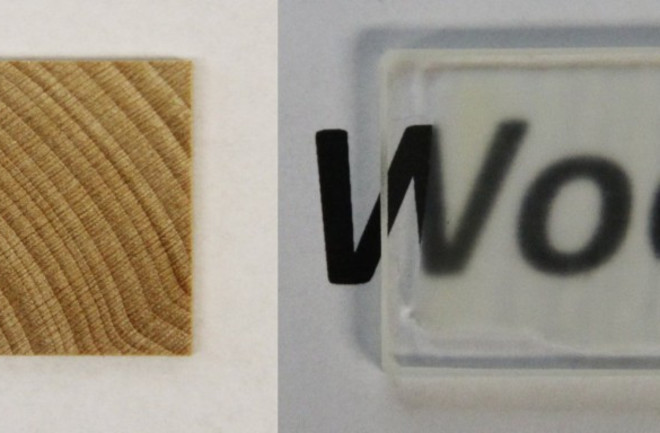 A block of wood before and after the two-step process to turn it transparent. (Credit: Liangbing Hu)

Wood makes for better walls than windows — most of the time.

Researchers from the University of Maryland devised a way to strip the colors and and chemicals from a block of wood to leave behind a clear, transparent material that’s stronger and more insulating than glass, and biodegrades better than plastic.

The process of turning wood into windows is actually a pretty simple process. First, the researchers put blocks of wood in a boiling bath filled with water, sodium hydroxide and other chemicals for about two hours. This caused a polymer known as lignin to leach out of the cell walls in the wood. Lignin is one of the most common compounds in the plant world, and its chief function is making plant cells more rigid. Crucially for the researchers, lignin is also what gives wood its color — with the compound gone the wood turned white.

Then, the researchers soaked the wood with an epoxy, which both strengthened the wood and turned the wood clear. The secret lies in the natural architecture of the wood, combined with the refractive qualities of the epoxy.  Even though its color was gone, the underlying structures in the wood remained the same, including the tiny channels that trees use to transport nutrients. When filled with the epoxy, these channels turned into conduits for light, focusing it and allowing it to pass through. The end product looks more like a piece of plastic than something that once stood in a forest. They published their work in the journal Advanced Materials.

The transparent wood is stronger than glass and won’t shatter on impact. But wooden windows have a ways to go before they start appearing in homes.

Currently, the researchers can only treat wood chunks that are up to about four inches to a side. In addition, they are currently limited to about a centimeter in thickness, although they have made clear wood that is as thin as a sheet of paper as well. A separate team of Swedish researchers also recently managed to create transparent wood with a similar method, although their wood was not as thick, and did not let as much light through.

As of right now, the University of Maryland researchers say that their wood achieves a 90 percent transmittance rate for light.