Bush vs. Science: Is the White House Credible?

At first it seemed like another broadside from frequent White House critic Representative Henry Waxman, a liberal Democrat from Los Angeles. Early this August, at his request, the minority staff of the House Committee on Government Reform issued a 40-page report charging the Bush administration with misusing science to advance a conservative agenda. The study described “misleading statements by the President, inaccurate responses to Congress, altered web sites, suppressed agency reports, erroneous international communications and the gagging of scientists.”

APPOINTMENTS. The administration named “unqualified persons” with political agendas or industry ties to key policy posts or advisory committees, and it opposed qualified experts if they appeared to be anti-industry.

The press gave the Waxman report fleeting attention and, not surprisingly, the Bush administration dismisses it as partisan sniping. “The only one putting politics above science is Congressman Waxman, whose report is riddled with inaccuracies, distortions, and omissions,” says Kathryn Harrington, spokeswoman for the White House Office of Science and Technology Policy. In the world of science, however, Waxman had a major impact, unleashing widespread anger from scientists in virtually every discipline—anger that had been simmering just below the surface. “There’s been a long record of elective use of science by the Bush administration,” says Glen Barry, a conservation biologist at the University of Wisconsin. “My colleagues are very concerned about this.” Jeremy Symons of the National Wildlife Federation concurs: “Every scientist, regardless of whether he agrees or disagrees with the positions of the administration, is concerned that sound science isn’t being given due course,” he says.

One possible solution comes from Henry Kelly, president of the Federation of American Scientists. He argues for the restoration of an agency like the Office of Technology Assessment, abolished by a Republican-controlled Congress in 1995. It was an independent body that helped congressmen and others assess technological and scientific issues. In the never-ending battle between science and politics, independence could be a good thing.

Pervasive financial ties between universities and the pharmaceutical industry are tainting biomedical research, according to a study published in The Journal of the American Medical Association last January. A research team led by Cary Gross of Yale University School of Medicine found that one-fourth of academic medical researchers receive funding from drug companies and that a large number of universities hold stock in start-up companies that perform research at the same institution. Gross and his colleagues examined data from more than 1,100 biomedical studies conducted since 1980. They found that research backed by industry was three times more likely to arrive at proindustry conclusions than studies without such backing.

Alan Goldhammer, associate vice president for regulatory affairs of the Pharmaceutical Research and Manufacturers of America, dismisses the Gross study as a “very narrow look” at the broad spectrum of research and accuses the Yale team of “impugning the integrity of the investigators who conducted the tests.” Goldhammer points out that all clinical trials are reviewed by the Food and Drug Administration and by the journals that publish them and that pharmaceutical companies require the researchers they support to state their sources of funding. But Marcia Angell, a senior lecturer in social medicine at Harvard Medical School and the former editor of The New England Journal of Medicine, says companies often structure research in a manner that is most likely to yield favorable conclusions—by comparing a medication against a placebo, for instance, instead of comparing it with its most effective competitors. Angell adds that the conduct of medical research has changed drastically in the past two decades, as teaching hospitals nationwide have seen their revenues squeezed.

At the same time, the pharmaceutical industry has enjoyed unprecedented profits and has become much more aggressive in controlling the research it sponsors. “It used to be that companies would give a grant to a university and then stand back,” Angell says. But today those companies often insist on participating in the design of the studies they sponsor and sometimes claim the right to suppress results they consider unfavorable. Nor is it uncommon for researchers to have lucrative consulting arrangements with the companies that fund them. Angell and many others warn that unless these current trends are reversed, the credibility of medical research could be eroded. 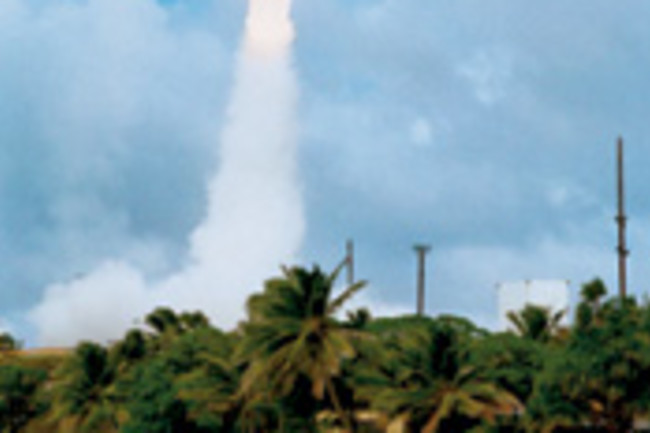 Scientists say that American defensive missiles, like this one tested in the Marshall Islands in 2001, will always fail unless they are bigger, faster, and located close enough to intercept enemy missiles in the boost phase of flight. | United States Department of Defense

If it’s not one thing, it’s another. In July an American Physical Society panel raised new doubts about Pentagon plans for a weapons system to shoot down enemy missiles. In theory, the best time to intercept an enemy warhead is in the first three or four minutes after launch, when its blazing rockets are emitting a telltale—and highly trackable—plume. In practice, the panel concluded, technological obstacles may be insurmountable. “It is much more difficult than people had thought,” says physicist Frederick Lamb, cochairman of the group.

Lamb and his colleagues calculated that hitting an intercontinental ballistic missile during its boost phase requires defensive weapons within 250 to 600 miles of the flight path. That is logistically possible if the attacker is a small nation like North Korea and aims its missiles over international waters or allied territory, where they could be hit shortly after launch (if interceptor rockets are larger and faster than current designs). But a medium-size country like Iran could easily tuck launch sites deep inside its borders, well beyond the reach of early interceptors.

The panel also compared the burn times of conventional liquid-fuel rockets with those of advanced solid-fuel missiles during the booster phase. Using solid fuel results in a much shorter burn time (and therefore a narrower intercept window). Put another way, Lamb says, solid-fuel missiles would be virtually impossible to bring down with existing technologies—or any likely to be developed in the next 10 to 15 years. By then, such so-called rogue nations as North Korea and Iran could have them in place. “We aren’t saying boost-phase defense will never be possible,” Lamb says. “These ideas don’t violate the laws of physics. But is it worth doing? Would we make ourselves safer by spending that money on something else? A judgment call needs to be made about money and time and resources, and in this area, reason has often taken a backseat.”

Everyone knows the story of the Princeton University undergrad who designed an atomic bomb using information he found in scientific journals. Since the post-9/11 anthrax attacks, researchers have become increasingly concerned that someone less savory—a bioterrorist, for example—could misuse critical details in scientific journals, publications that depend on the free flow of ideas. Last January a group of 32 editors and publishing officials, most from prominent life-science journals, met in Washington, D.C., to consider whether some scientific papers might be too dangerous to publish.

What sparked the conference, conducted by the National Academy of Sciences and the Center for Strategic and International Studies, was the widespread press attention to two research papers. One, published in Science in July 2002, showed how a live and disease-causing poliovirus could be synthesized from various organic chemicals. The other, in the Journal of Virology in early 2001, explained how to alter the mousepox virus so it could infect an otherwise immune mouse. “The concern was that you could repeat this process with smallpox,” explains Ronald Atlas, president of the American Society of Microbiology. “And that would be deadly.”

The Washington meeting produced vigorous debate between those who insisted that scientific inquiry would be harmed by any restrictions on publication and those who were willing to consider some form of self-censorship or self-restraint in the interest of security. Lynn Enquist, editor of the Journal of Virology, was among those opposed to any challenge to open publication. “Censorship is the slippery slope for us,” he says. “We’re very good at identifying good science. We’re not very good at reading the minds of people who might make other uses of it.” If scientists see a problem, he says, they should not submit a manuscript. “Focusing on the journals is focusing on the wrong end of the process,” he says. “Some research work probably ought to be classified in the first place.”

In the end the workshop participants issued a statement, later published in many journals, that sought a middle ground. It defended openness as essential to scientific progress. But at the same time, it encouraged journals to take security issues into account and consider modifying or not publishing an obviously dangerous paper. “I reject the idea that we’ve agreed to censorship,” says Atlas. “We have added an ethical concern to our concern with scientific quality. If we believe that the dangers of a paper outweigh the benefits, then it’s our responsibility as editors to make decisions about whether and how to publish.”

By some measures 2003 was a banner year for elite women scientists. Seventeen women were elected to the prestigious National Academy of Sciences in Washington, D.C., and nine women made it into Britain’s corresponding organization, the Royal Society. But for some inductees, the honor was bittersweet. “Honestly, I thought I should have gotten in a while ago,” says Cynthia Kenyon of the University of California at San Francisco, whose two decades of research since the 1980s on the developmental biology of the nematode worm Caenorhabditis elegans finally earned her a place in the National Academy. “It sounds like bragging, but I started a whole field in aging—that aging is regulated by hormones, that it is an evolutionarily conserved process. It was a huge discovery.”

At least one new member of the Royal Society had to wait an unconscionably long time. The doctoral studies of Jocelyn Bell Burnell at Cambridge University in the 1960s led to the discovery of pulsars and helped her adviser to a share of the 1974 Nobel Prize in Physics. This year the Royal Society finally deigned to honor her. She is now the dean of science at the University of Bath.

Candidates are nominated by the current members of the academy and the Royal Society, which are 92.3 percent and 95.6 percent male, respectively. “Every man has a man he wants to see get into the academy. What has to happen is that people want to nominate women,” says astronomer Vera Rubin of the Carnegie Institution of Washington. Rubin was elected to the National Academy of Sciences in 1981 for work that led to the discovery of dark matter. She calculates that 24 women would need to be in every class of those elected for women to make up one-quarter of the academy’s membership by the year 2030. Or, she suggests, the academy could take a more dramatic step and deliberately elect an all-female class.