Curiosity will satisfy its curiosity by zapping rocks on the Red Planet and watching the resulting plasma. 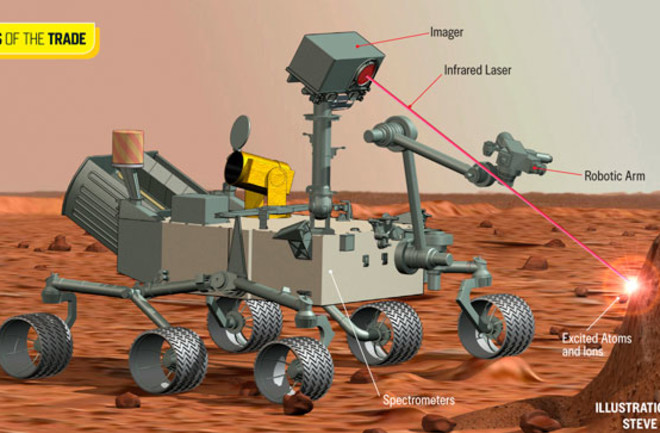 Sometime this August, a six-wheeled, sedan-size mars rover named Curiosity should begin rolling across the surface of the Red Planet. The vehicle, carried to its destination aboard the Mars Science Laboratory, will start its journey on the floor of Gale Crater, a 96-mile-wide depression marked with channels suggesting a watery past. But scientists have not yet decided exactly what Curiosity and its versatile suite of instruments, including the ChemCam, will explore first.

Mounted atop the rover’s mast, ChemCam’s infrared laser can focus a pulse of energy equivalent to the output of a million lightbulbs on a target as far as 25 feet away. At the beginning of each Martian day, scientists will choose a zone of interest, such as an intriguing rock outcrop, and instruct the rover to fire pulses around the area. Each time the laser hits rock, the impact point will erupt into a tiny ball of plasma, explains principal investigator Roger Wiens of the Los Alamos National Laboratory in New Mexico. Excited atoms and ions in the plasma will quickly decay, producing bursts of light. ChemCam’s imager will capture these flashes and relay them to three spectrometers in the rover’s base. Elements decay at different wavelengths, or colors. The spectrometers will detect these subtleties, identifying every element in the sample—including the lightest components like hydrogen and lithium—for the first time. At the end of each day, the rover will relay the data back to Earth, where scientists will gain insight into Mars’s composition and potential for life.

The multipurpose ChemCam will also help Curiosity’s other tools explore more efficiently. Serving as an advance scout, it will scan for noteworthy rocks so the rover’s robotic arm collects only the most intriguing bits of Mars to bring onboard. Then the instruments inside will tease out more information about the rock, such as its crystal structure. “We now have a system that can actively interrogate a rock at a distance,” Wiens says. “We are sure to find out a lot more about Mars.”