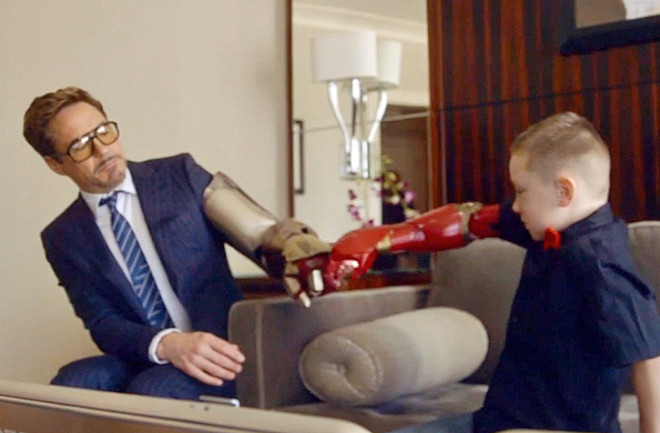 Robert Downey Jr. fist bumps Alex Pring, who was fitted with an Iron Man-themed bionic limb. Credit: Screengrab from YouTube Tony Stark is the reckless playboy at the head of Stark Industries, and he’s also, of course, Iron Man. And in between saving the world from his archenemy Mandarin and running a multibillion-dollar conglomerate, he somehow found the time to warm our hearts. Robert Downey Jr., in character as Stark, recently paid a visit to a 7-year-old named Alex to give him an Iron Man-themed prosthetic arm. Alex was born with an underdeveloped right arm. Because it was 3-D printed, the bionic arm cost just $350 in materials to create – a fraction of the cost of similar bionic limbs. After the gifting, the team watched Alex give his mother a two-armed bear hug for the very first time.

Albert Manero, a Fulbright scholar and mechanical engineer at University of Central Florida, designed the arm. Manero founded the volunteer group Limbitless Solutions, which works to design inexpensive 3-D-printed prosthetics. Limbitless primarily serves children, whose small prosthetics are harder to build and are quickly outgrown. Alex’s limb uses electrical muscle signals to control its movement, and the Limbitless team hopes to expand into developing bionic legs and elbow joints. Limbs like Alex's can cost up to $40,000. Even with the small price tag, the Limbitless team pooled their money together to pay for Alex’s limb. “We were all bound to the belief that no one should profit from a child in need of an arm,” Manero said in a news release. Now that's some superhero stuff.