To the End of the World

It's an ancient reflex. Whenever Earth's surface—always a dicey place—becomes even less safe, people go below it, hoping that the latest wave of insanity will wash harmlessly over their heads. Creating underground sanctuaries against human aggression dates back to prehistory and hit its modern zenith shortly after September 15, 1961, when Life magazine's cover story promised to reveal "How You Can Survive Fallout." Inside, a chilling letter from President Kennedy urged Americans to learn how to build fallout shelters. As cold war tensions ebbed in the 1990s, many domestic bunkers were demolished or converted to wine cellars. After the terrorist attacks of September 11, 2001, most Americans fought the burrowing reflex: They watched the news and worried. Some planned makeshift aboveground sanctuaries made of plastic sheeting and duct tape. A few embraced the old urge and sought to make safe havens below the sod. One New Hampshire company reported quadrupled sales for its shelters, including a $64,000 egg-shaped fiberglass module that is shipped fully outfitted and ready to drop into a hole. But the smallest minority of all smiled grimly and rubbed more petroleum jelly on the blast-door gaskets. These are the ones who built or bought large, serious shelters decades ago and kept them in fighting trim, convinced that hardened bunkers, air locks, and decontamination showers would never go out of style. 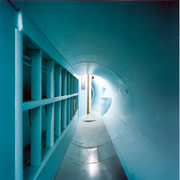 The tunnel-like entrance to an underground shelter in Emigrant, Montana (left), was constructed of recycled oil tanks welded together to create a twisting path meant to deflect radiation that might get past the door. Built by adherents of the Church Universal and Triumphant in 1989, the shelter holds enough food and fuel to support 90 people for seven months. "Back then, India and Pakistan were talking about lobbing bombs at each other," says Charles Hull, a church member who performs most of the shelter's maintenance. Church leaders predicted the conflict would expand and "told us to expect a first strike against the United States, but nothing happened."

Richard Ross, a professor of art at the University of California at Santa Barbara, has spent the last four years taking pictures of shelters old and new, public and private, fussed-over and abandoned, around the globe. "I've focused mostly on civilian shelters," he says. "I am not interested in shelters against natural disasters. I am seeking the places we go to hide from the inhumanity we rain upon each other. I am trying to make people confront this reality." Together with Ross, I spent a night in an extraordinary million-dollar, 7,000-square-foot shelter in Emigrant, Montana. Finished in 1989, it is one of the largest private shelters in the United States. It rambles underneath the small farm of Philip Hoag, author of No Such Thing as Doomsday, a book on disaster preparedness. Built as a cooperative venture by local citizens, the three-story, steel-reinforced concrete bunker can house 150 people in 40 tiny staterooms. The result is an impressive feat of design and engineering, complete with a decontamination chamber, security tower, radio room, medical clinic, library, institutional kitchen, three diesel engines that make power and heat, and enough lentils, wheat berries, and other foodstuffs to feed all the occupants for a year. In his book, Hoag delineates more than a dozen disaster scenarios, including nuclear, biological, and chemical attacks, and his shelter is designed to withstand them all. "We live in an age of weapons of mass destruction," he says. "You need to be prepared, but I hope it turns out to have been a foolish investment." 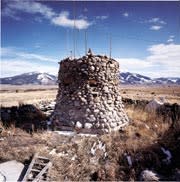 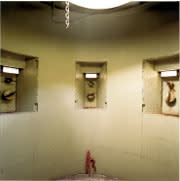 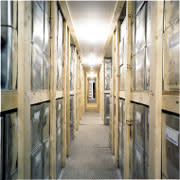 Like a medieval battlement—or perhaps a termite mound—the observation tower of Philip Hoag's capacious shelter in Emigrant, Montana (above, left), pokes above the cold, dry terrain. Inside, the tower's small windows reveal themselves to be the ends of surplus military periscopes (above). They allow people peering outside to avoid bullets, radiation, and other line-of-sight hazards. Down on the lowest of the shelter's three floors (left), canisters of unhulled millet, sunflower seeds, dry milk, rolled oats, buckwheat for sprouting, long-grain rice, and dehydrated onions line the long hallway. Although some of the food is now 14 years old, "pretty much all of it is still good," Hoag says.

Large, sophisticated shelters are surprisingly common in this part of the country, inspired by a unique local mixture of antiauthoritarian politics and millennialist religion. Just a few miles up the road from Hoag's is a shelter partially built and wholly maintained by Charles Hull, an affable retired high school history teacher who moved here from Fresno, California. An adherent of the Church Universal and Triumphant, he and some friends built the $450,000 installation in 1989 in response to a prophecy that nuclear annihilation would arrive on March 15, 1990. On that night, 90 people crowded inside and waited. "It didn't come, of course," says Hull, sitting in the velvet recliner in the shelter's living room—aside from the lack of windows and the pictures of Ascended Masters on the wall, the ambience is strictly American suburban. He denies having a death wish but adds, "after all the time and money we put into it, I suppose we actually wanted someone to attack us." It is all a bit disorienting. Are these people foolish? Or are we, the shelterless majority, the fools? Waking up in Hoag's chilly shelter (with the heating system shut down to save money, the whole place takes on the ambient subterranean temperature, which is 50 degrees but seems colder), the silence roars in my ears. I wander down the dead-quiet hallway into another little stateroom in which, for some reason, a small, red-paper cutout cupid hangs from the ceiling. I stare at it and think. 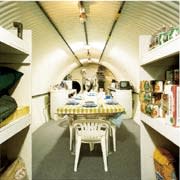 "The technology exists to protect people, but Americans just don't do it," proclaims Paul Seyfried, whose state-of-the-art shelter in the mountains of Utah features this dining-room table, sturdy enough for surgery if necessary. The shelter has sophisticated air- and water-filtration systems imported from Switzerland, where building codes require shelters in new homes and other buildings. Together with nuclear engineer Sharon Packer, Seyfried runs a company that has sold more than 100 Swiss-built shelters in the United States and Canada since 1997. "Americans spend more than $300 billion a year on defense, but we are completely undefended from nuclear, chemical, or biological attack," he says. "Now, a small number of Americans are taking their families off the hostage list." 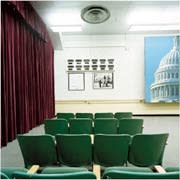 In 1992 a story in The Washington Post revealed the existence of the U.S. government relocation facility designed to house Congress in the event of a nuclear strike. The complex, code-named Project Greek Island, was built from 1958 to 1962 beneath a new wing of the posh Greenbrier Resort in White Sulphur Springs, West Virginia. Because the cover had been blown, the government ended its lease agreement in 1995, and ownership reverted to the Greenbrier, which now offers tours through the 112,000-square-foot facility, charging $27 for admission. Designed to house as many as 1,100 people, it features 18 dormitories, 12 hospital beds, a records-storage vault, a power plant, kitchen and dining facilities, and a communications briefing room (shown right) that could double as a television studio. The photograph on the wall was taken March 25, 1956, when President Eisenhower hosted the North American Summit Conference at the resort. According to Greenbrier publicist Lynn Swann, that's when Eisenhower got the idea to build the shelter and persuaded the Greenbrier's owners to cooperate for the sake of the nation.

Conclusion: Count me in with the worried, unprotected masses. A world that's sufficiently scarred and scoured to require this kind of place will need to soldier on without me. In this eerily still and lifeless room, listening to my heartbeat, it occurs to me that each person is allotted a finite store of time, energy, and money. Every hour, calorie, or dollar expended to build a shelter like this is an hour, calorie, or dollar that can't be devoted to crafting the kind of world that doesn't need them. I wonder if these places might ever constitute self-fulfilling prophecies. What if, even in a small way, they have the same effect on peacemaking efforts that a pre-nup has on a marriage, silently sabotaging the requisite optimism? Shelters, Ross says, are the architecture of failure: "the failure of moderation, politics, communication, diplomacy, and humanity." Maybe someday we will massacre the planet, but if we do, I would prefer to know that we had at least stayed loyal to the foolish hope that we could do better. 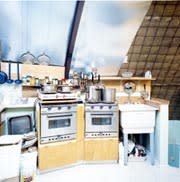 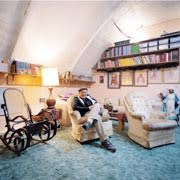 "It took me 15 years to save the money that I have put into this," says former high school teacher Charles Hull (right), ensconced in his Emigrant, Montana, shelter, which is resistant to nuclear, biological, and chemical attack. In 1988, 90 members of his church pooled funds to finance the shelter, which includes a well-stocked kitchen (left). However, in the years since, most have stopped paying their $100 annual maintenance fees. "I do wonder whether it was a good idea sometimes," says Hull. "You get to thinking about the trips to Hawaii you could have taken instead."

Richard Ross's book Waiting for the End of the World will be published by Princeton Architectural Press in the spring of 2004. To see more about Ross's work, go to www.richardross.net.