To Send a Message to a Submarine, Fire Up the Laser Beams 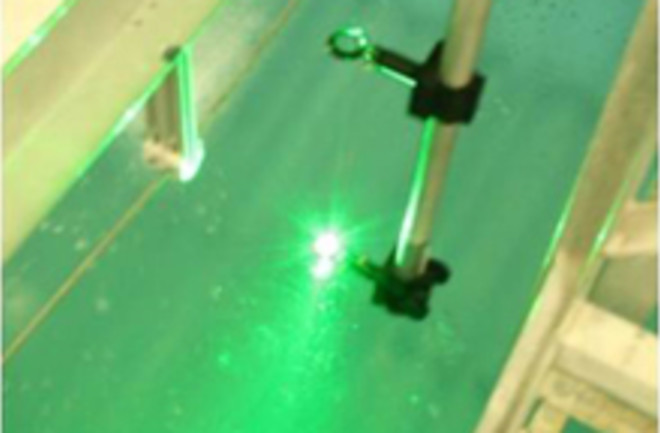 In future military operations, aircraft and submarines may be able to stay in contact by firing up the laser comm. Researchers have devised a new way to communicate with submarines by using high-energy laser beams to create bubbles of steam in the water, which then pop in little explosions that generate a 220-decibel pulse of sound. By controlling the frequency of explosions, researchers could make a kind of underwater Morse code. According to a press release from the U.S. Naval Research Laboratory,

one of the peculiar effects of high-intensity laser beams is that they can actually focus themselves when passing through some materials, like water. As the laser focuses, it rips electrons off water molecules, which then become superheated and create a powerful "pop". Because different colours of light travel at markedly different speeds underwater, the precise location where different colours focus together could be manipulated by the suitable design of a many-coloured input pulse [BBC News].

the laser beam could travel "many hundreds of meters through air" before generating its acoustic effects in the water. This would allow a aircraft high above the sea to fire a laser downwards, generating sound pulses which could be received by underwater telephone gear aboard a submerged submarine [The Register].

This could be of great use to the navy, since submarines currently have to surface for most forms of communication, leaving them more vulnerable to detection and attack. Related Content: 80beats: Laser Transistors Could Usher in Super-Fast “Photonic” Computers 80beats: “Laser Avenger” Shoots Down Unmanned Plane in a Test of Future Weaponry 80beats: Military Tests New Missile Defense System: Lasers Mounted on Jumbo JetsImage: Naval Research Laboratory