To Help Fidgety Kids, Researchers Made a Brain Scanner That Fits in a Bike Helmet

The MEG scanner could be used to help study autism, seizures and more in children. 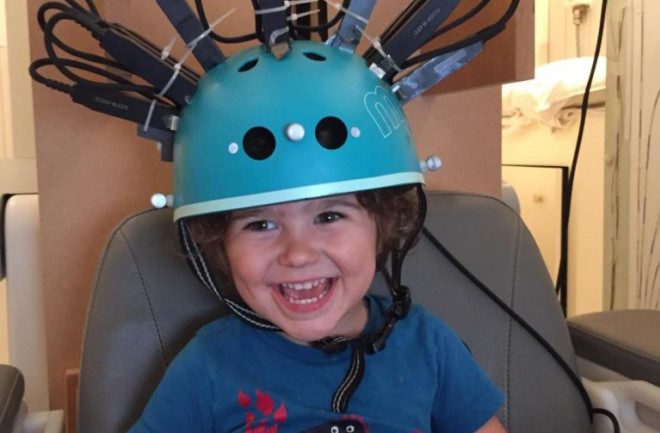 A simple bike helmet may be the answer for researchers looking to study the brains of fidgety kids. With a few extra holes drilled in the top and a pile of chunky cables ballooning outward, the common piece of headgear could offer an alternative to stationary brain scans.

With a few tweaks, researchers from the U.K. equipped a commercial bike helmet with a magnetoencephalography (MEG) scanner, which uses magnetic fields surrounding the brain to detect activity. The highly sensitive sensors can pick up more nuanced data than can EEGs, which is why doctors commonly use MEG scans to find the origin of a seizure in a patient’s brain.

In a report published today in Nature Communications, the U.K. team argues that the wired-up helmet could be a useful device for future clinical studies on brain activity, especially in children. The helmet could allow researchers to observe subjects in more natural environments, allowing for movement without the risk of hindering results.

In-hospital MEG machines are stationary beasts that rest over a patient’s head to take scans. And the huge devices come with limitations, especially for younger patients. Because the scanners are highly sensitive, analyzing the brains of children can be difficult if they move even a few millimeters. And adults with movement disorders or claustrophobia may also experience difficulty during the scanning process.

Portable MEG scanners have been in the works for at least a decade. The MEG lab at the University of Nottingham has been researching the technology since 2007, and published a report on a similar wearable MEG device last year.

But that device fit a bit differently than the bike helmet. In their 2018 report, the research team designed a mask that was 3D-printed to fit a patient’s head perfectly, and took scans while the patient made gentle physical movements, like playing ping pong or sipping tea. Though the results were promising, researchers wrote in their current report that the personalized masks were costly and might not work for children.

To find a scanner that was portable — but that would also work for people of all sizes — they turned to a modified bike helmet, one that adapts the same scanners as the mask.

The scanners themselves work a bit differently than the large, stationary devices in hospitals. Big MEG machines rely on arrays of SQUIDs — superconducting quantum interference devices — which are extremely sensitive chips that have to be cryogenically cooled in a large tube to work properly. But the new sensors, known as optically pumped magnetometers (OPMs), can operate at room temperature and have comparable sensitivity to SQUIDs.

And OPM sensors can be placed closer to the patient’s head, allowing more nuanced movements to be picked up by the scanners. The bike helmet was able to detect brain activity from even the youngest test subject, who was just 2 years old.

In a press release, the researchers said they hope the new device will open the door to new studies on children, especially those with epilepsy, autism and mental health conditions.

“This study is a hugely important step towards getting MEG closer to being used in a clinical setting, showing it has real potential for use in children,” study author and leader of MEG research at the University of Nottingham Matthew Brookes said in a press release. The next challenge will be to commercialize the helmet for use in clinical settings — and possibly places outside the lab.